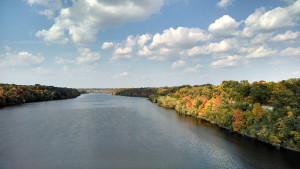 The Mississippi River above the Ford Dam in early autumn (Photo by K. Chapman)

April 15, 2015. Driving to Northfield a couple weeks ago via the old Robert’s Trail—now MN Hwy 3—I cross a few small streams, one being the Vermillion River. I had studied this river—pushing that definition a bit, for in places it is about wide enough to jump across. It is a renowned brown trout fishery despite its urban and rural setting, thanks to loads of chilly water dumped into it hourly from buried seams of glacial gravel and fractured limestone. On my way to Northfield, where Jesse James and the Younger brothers robbed a bank in 1876—one of their most miserable of ventures as they were violently expelled by the citizens—I saw the vertical black earth banks of this remarkable little river. At that moment, several recent news items came into focus. Item 1: Governor Dayton proposes 50-foot wide strips of filtering vegetation on both sides of most Minnesota streams. Item 2: Minnesota Pollution Control Agency says just a few of southwest Minnesota’s streams can be fished or swum in. Item 3: The Des Moines Water Works is suing three agricultural counties for discharging into the Raccoon River nitrogen-saturated water via ditches and tile lines. Water high in nitrogen hurts people, especially babies, and it costs the Water Works several thousand dollars each day to filter out the nitrogen fertilizer applied to crops upstream and washed downstream to the drinking water supply for half a million Iowans.

These things aren’t a local problem—I grew up seeing it in Detroit area streams, and in subsequent travels across the mid-continent, and can only conclude it is a common one. Do farmers owe people who want to swim or fish in streams, which in the Eastern U.S. by law belong to everyone, payment to use these waters to dispose of a byproduct of agricultural production? Or do anglers and swimmers owe farmers the cost of keeping nitrogen on their fields and out of streams?

…still a long ways to go in this conversation, with some experiments out there—such as nutrient trading, modeled after the successful sulfur dioxide trading that cleaned up our cities’ air in the 1990s. For the moment, however, society has not cottoned on to the idea that rivers should not run chocolate after rains or algae-green the rest of the time. And that, sadly, means regulations, which are usually a more expensive way to go.

By the way, Abraham Lincoln died 150 years ago today, which has little to do with water quality but a lot to do with hatred of righteous change. – Kim