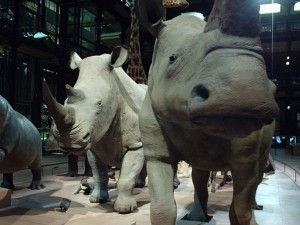 April 25, 2015.  The news last week that the last few northern African white rhinos depend on round-the-clock armed guards to prevent death by poaching, struck a nerve. It’s about time, but at the same time, it’s more of the same. The rise of middle classes in Asian countries, where ground rhino horn powder is valued for its health effects, is the chief culprit. People have more money, and demand is up for expensive, once out-of-reach luxuries. Making this worse is war, insurgency, political turmoil, and poverty—African governments struggle to pay the guards enough to keep them from becoming poachers themselves, or simply to have guards at all in the national parks where most of the continent’s megafauna hang out. And who can blame the nascent middle class for aspiring to something better—such as better health—despite Western medicine’s view that it’s all quackery. 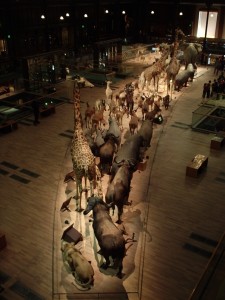 African megafauna, several on the path to extinction in the wild, walk the grand hall at the National Museum of Natural History, Paris (Photo K. Chapman)

Also on the shopping list are other megafaunal species we know and love—tigers, leopards, elephants, bear—and those we love less, like sharks. Tiger penis is highly valued to improve male virility, and bear gall bladder bile, it is said, will cure liver ailments. Shark fin soup is a delicacy. A jaguar throw rug is just cool. These species and hundreds of others hold special powers for consumers somewhere in the world. Progress is being made, though. In 2014 the Chinese government made it illegal to sell or possess parts or all of endangered animals. And another species of rhino—the black—has come back from the brink thanks to heroic work of conservation agencies and governments in southern Africa.

This leaves us with an interesting dilemma. In our own back yard we basically ate up all the passenger pigeons, once the most abundant bird on earth. The last one, Martha, died in a zoo on September 1, 1914. I saw a stuffed one once, ensconced in a glass box at Harvard’s Natural History Museum. Hundreds of species have gone the way of the passenger pigeon since Europe began exporting its civilization across the planet, circa 1500 AD—eaten, used for medicine or decoration, pushed out of habitat, and so on. It’s not just modern people, either. Before that, the Paleolithic hunters—19,000 years ago in North America, 30,000 or so years ago in Australia, for instance—gobbled up wild biomass and changed the habitat such that hundreds of other amazing creatures winked out—camels and giant sloths in Nebraska, for example. There’s a good long tradition of people being the agent of species rearrangement on the globe. (See http://en.wikipedia.org/wiki/Lists_of_extinct_animals.) Lest we think this is ancient history, the Dusky Seaside Sparrow was declared extinct in 1990, brought there to a large degree by our nation’s space program at Cape Canaveral, where most of the birds lived —yes, to put a man on the moon we drove an organism to extinction. Strange but true. 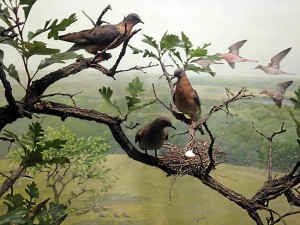 Stuffed passenger pigeons nest in a wax bur oak in a diorama at the Bell Natural History Museum, Minneapolis. The nest and egg are said to be the last ones found in the wild. (Photo R. Chin)

Back to the dilemma…by nature we seek to increase ourselves and make ourselves comfortable. We are now quite plentiful on the planet—7.3 billion of us—and overall the standard of living is rising. In our quest, other species have given way and will continue to do so. The heroic achievements of conservation biologists and protective agencies—think of the 10-foot wing-spanned California condor rescued from oblivion, bred, and recently sent back to the wild—are merely fingers in the dike, given predictions of 8 to 11 billion humans 35 years hence. Only a scant few are aware that we are in the midst of—causing, in fact—the sixth great planetary extinction event. We are now a force as global as meteor strikes and volcanic eruptions. For most, this is hard to imagine, and even harder to believe. For others the fate of the white rhino drives the point home and engenders outrage or despair.

More useful than outrage or despair is to change behavior. That is the hardest thing of all because we are bound up in a cultural-economic-technological web that is designed to extract the most from nature. The point of view that underlies how we relate to and use nature is out of date. Consuming or converting nature for our ends was once necessary for survival, but is now possibly working against our survival, or at least our enjoyment of life. That is the crux of the matter—even though our extinction is unlikely with so many adaptable, clever humans—to preserve for ourselves an interesting, pleasant planet, our point of view must change. That will take years…because it happens one person at a time. – Kim