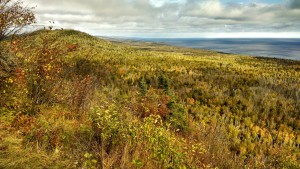 October 19, 2015. I recently spent a tawny fall weekend on Minnesota’s North Shore.  It was the last possible weekend to see any color—already many of the trees were bare, and the birch leaves had achieved that sere, deep yellow-gold that is almost turning the corner to brown, though they still dazzle when a shaft of sun hits them.  My wife and daughter and I hiked a trail that follows the Split Rock River up one side to a waterfall and then back down the other side.  It is a trail we always love because it has views of so many rushing cataracts, scarred cliffs, and quiet pools overhung by gnarled cedars.

However, as we walked I was paying attention not just to the fall leaves and the applauding river but also to the various trail structures that were put in place to protect the slopes from erosion.  The boardwalks and wooden stairways and little bridges are all hand-crafted from unpainted lumber that has aged beautifully and which has tended to settle into the landscape in pleasing ways.  These structures have a kind of Japanese aesthetic—simple, unadorned, carefully fitted to the terrain.  Scarcely anyone gives them a thought, yet they are architecture.  Someone designed them; someone tried hard to make them serviceable but also discrete.  I thought of Japanese shrines, which often commemorate some Shinto earth spirit, and which have a similarly weathered and rugged look.  I realized that our parks are just that—temples to our worship of the powers in the landscape—even though we take great pains to deny the landscape is inhabited by powers.  Any alien from another world, however, would be quick to point out what we are doing.  A trail like this is a little pilgrimage walk to a holy site over structures lovingly maintained by the temple priests.  I wonder if the members of the park service trail crew have ever thought of themselves that way? – Jim