March 1, 2016.  Last month Elizabeth and I drove several hours in the general direction of the North Pole, walked across a frozen lake on snowshoes, and settled in for a few days of isolation and immersion in the cold and white of a Minnesota winter.  We’d come to our friends’ cabin, trying to outrun the presidential election trauma and leaving work and care behind for a while.  A mere year earlier one of the rewards of the trek would have been a sense of immense isolation—only a telephone line and radio waves connected us to the larger world.  No TV, no Internet, no road.  Really—a place to unwind and escape the sense that you were missing something by not tuning in to the max. 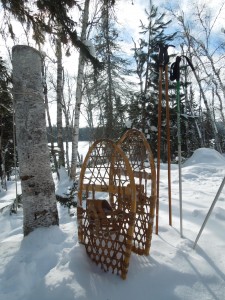 Escape on a pair of snowshoes.
Photo K Chapman

Well…this time, not so much isolation, for the intrepid cable guys had in the previous months successfully penetrated the wilderness with a cable that sutured us to the world.  With wireless now available in the cabin, laptops and phones were out and active.  I tried to resist, but gave in to my personal failing—looking crap up.  Which I did, though not relentlessly, as I might have back home.

All this is to say, when Elizabeth and I made our snowshoe way out and about over the next couple of days, it was marvelous to discover who our neighbors were.  By that I mean, the nighttime wanderers who left tracks in the snow for us to find the next day.  Wolf, moose, fisher, marten, flying squirrel, red squirrel, otter, snowshoe hare, and possibly least weasel (which we’d seen before—they dive in and out of snow banks, leaving round entry holes). 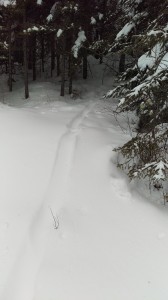 What else but an otter? Photo K Chapman

Maddy the dog stands in tracks made by one of two wolves the night before. She is alert–good dog! Photo K. Chapman 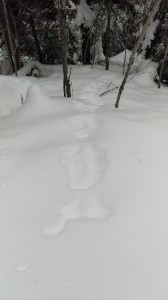 How did these tracks begin in the middle of nowhere? Flying squirrel dropped in–notice the tail smudge on the left. Photo K. Chapman

All that in a night’s work, while we slept, or, just before lights out, checked our email, Facebook and LinkedIn accounts–and looked up crap.  Gotta be aware of all that’s happening in the world, right?  I am happy, though, that the natural world gets along just fine without the trappings of a hyper-connected civilization. – Kim