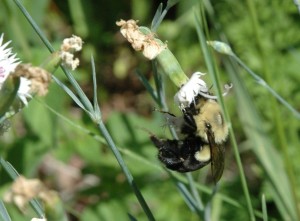 This very Bombus impatiens, gathering nectar from Jim’s garden in Winona, is now immortalized in picture and word. Photo by J. Armstrong

June 8, 2016.  I spent some time yesterday sitting in my front yard watching a bumblebee forage in the flowering pinks on the verge of our sidewalk. She was visiting not only the new blooms but also the nearly-expired ones, grabbing the withered blossoms and plunging her head deep into the faded stamens.  Why would she be attracted to this seemingly past-prime flower?  I went to the internet to look up what kind of bumble I was dealing with; thanks to the handy guide on the “befriending bumblebees” website, http://befriendingbumblebees.com/bumblebeesofMNweb.pdf, I was able to determine that this foraging worker was Bombus impatiens–the most common bumble in eastern North America.  B. impatiens, like other generalists such as robins and squirrels, do well in a variety of habitats, including suburbs and urban areas.  Their willingness to adapt to a variety of forage has led to their use by the greenhouse industry as a pollinator, and farmers use them to pollinate pumpkins, blueberries and tomatoes.  They were not historically common in Minnesota, but the fact that these bumbles perform an economic service has helped to spread their range.  At this point, with their cousins the honeybees in such decline, these bumblebees are now the most important pollinator species in North America.

Like most bumbles, B. impatiens colonies construct nests one to three feet below the ground, which they access through tunnels.  In the wild the bee is likely to be in wooded areas or meadows, as it depends on woodland flowers in the spring.  Upon learning this I wondered if the worker I was watching was from a local greenhouse, or from a wild hive that had survived the cold Minnesota winter.  I was surprised to read that B. impatiens lives in large groups of up to 450.  I was also interested to learn that my visiting bee was “traplining,” meaning that she had identified my flowery front yard as good forage and would return to it each day, along with other productive floral stops, taking the shortest route from her hive.  Bumblebees (along with many other species, such as hummingbirds) use this strategy to maximize the efficiency of their foraging (rather than randomly searching anew each day).  It was interesting to think this buzzing worker bee had memorized my yard and in fact was a local expert in exploiting its energy potential.  That would seem to explain why she was visiting past-prime flowers—she was mopping up every last bit of nectar.

She is not limited in her searches, however.  The traplining strategy includes the option to change foraging patterns: when the pinks in my yard stop giving nectar the bumble will notice and shift her location to a different and suitably plentiful source.  In this way, her hive is constantly learning and adapting as new information comes in from workers. 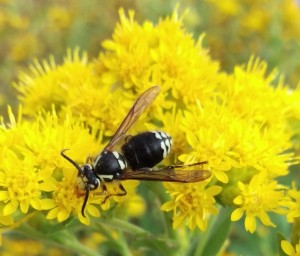 All this points to interesting parallels between insect hives and human cities.  Bees evolved to live in communal groups that are termed “eusocial,” meaning that most individuals in the hive don’t themselves reproduce.  In the bumblebee hive, some tend the larvae and feed them while others, like the bee in my yard, are tireless nectar-seekers.  The queen, of course, lays the eggs.  This frees up the others to become specialists and coordinate with each other—becoming much more powerful in aggregate than they would be as individuals.  While humans are not that self-sacrificing—so far we haven’t designated one female to bear all our progeny—our urban class structures share the same strategy of using job specialization and worker coordination to efficiently exploit resources in the environment, near and far.  And this implies, for both hives and cities, a special relationship to plants.

Bees and flowers co-evolved in the Cretaceous period, the product of an interesting symbiotic dance.  Flowers are essentially complicated bee-attractors, using their color and structure to entice insects to land on them and brush up against their pollen-producing stamens—so that the pollen will be carried to other flowers and accomplish sexual reproduction.  The bees get the nectar and pollen as bankable rewards for their labor—from the nectar they make honey, which with the pollen can be stored and enable colonies to survive the winter.  The flowers get genetic variation from cross-pollination, strengthening their gene pool.

Humans have similarly been able to stay in place and build communities because about 11,500 years ago they learned to successfully breed food plants (usually grains) to produce storable calories.  Unlike the bumblebees, however, the process was a conscious one, as humans noted which plants were most fruitful and through selective breeding encouraged them, year by year, to increase their yields.  The other aspect that makes the human strategy different is the scale at which humans are able to act in unison: the current global economy has essentially turned the entire earth into one big foraging field for the massive human population.  This makes us even more successful than B. impatiens because we have expanded our range and influence through our own energies, rather than being manipulated to greatness by a master bee-keeper.

My busy B. impatiens visitor also is lucky, in that she has for the moment entered into a kind of alliance with the human hive.  Many other pollinators are not so fortunate.  As pressure grows to convert land and water into calories for billions of humans, the important question becomes, will we be able to share our global and commercial traplines with the many other species on the planet? – Jim