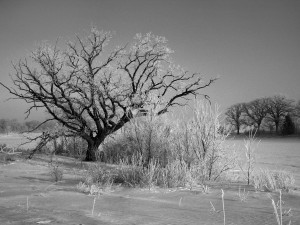 February 11, 2015.  As temperatures plunge once again–though not nearly as often as last winter–the collision of water and subzero air results in beauty of an uncommon type.  South of Missouri and Tennessee hoarfrost is a rare, ephemeral event.  In the northern tier of states these types of scenes happen a few to several times in a winter, and last much longer, sometimes two or three days, if not a week or more when accompanied by a massive Arctic high.  Outside of the upper temperate zones, they don’t happen at all, except on mountaintops.  Of course I have to mention climate change–nowhere in sight in last year’s overly long winter, unless you consider the behavior of the jet stream to be a bit unusual–with polar vortexes and such.  But climate is not weather, as the weather forecasters and climatologists tell us.  Here we have weather, for sure, although climate change is not far behind. – Kim