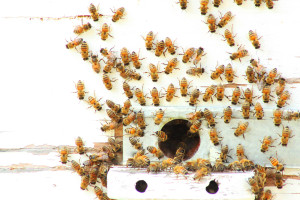 Busy bees talking through dance at the hive (Photo by Shutterstock)

February 28, 2015.  I spent this past Saturday at a folding table at the Frozen River Film Festival here in Winona, trying to convince passers-by to sign a pledge that said they would leave their dandelions on their lawn this coming spring.  I was with the Winona Area Pollinators, a group trying to make our town more pollinator-friendly.  The idea was that by leaving dandelions you are preserving forage for bees at a time of year when there are few alternative foods.  In our current culture, dandelions are the equivalent of Hester Prynne’s “scarlet letter”—a reason for public shaming.  But in fact dandelions are useful and beautiful early flowers, and we dislike them because we’ve been conned by the chemical industry and our own idea of park-like beauty into thinking that our lawns need to be green deserts, grass monocultures which we police with poisons. In this we homeowners become industrial farmers in miniature. One of the reasons for bee colony collapse is that our agriculture has become a type of chemical warfare: as farmers push their acres to produce more and more corn and soybeans, they are using genetically modified plants designed to withstand herbicides.  The weeds and flowers that used to thrive in the hedgerows and ditches are either eliminated or made toxic (through inadvertent gene transfer of pesticide traits) to the bees that do the hard work of pollinating the world. Butterflies are suffering as well–you may have heard of the drastic collapse of the monarch population due to the absence of milkweed and possible effect of pesticides such as neonicotinoids. So save the dandelions, and feed the bees! And while you are at it, plant some milkweed for the monarchs. – Jim