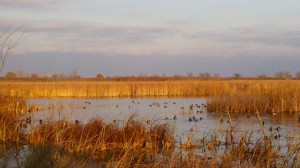 March 16, 2015.  After six days of plus 60 temperatures, the geese are stirring…along with many others, me included.  There they stand, a mom and dad goose, somehow highly encouraged to raise a family despite the ice they occupy until it melts.  Well, that’s not exactly right–small ponds sport a ring or perhaps patches of frigid water, and while I expect red-winged blackbirds or teal, a song sparrow or other evidence of the advancing front of bird lives, it is still mostly geese floating.  At least they are paired up, signalling a certain end to winter.  I think I saw this morning a little diver–bufflehead or goldeneye–winging it frantically over the commuter maelstrom where Cedar Avenue crosses the Minnesota River backwaters, but prudence kept my eyes mostly fixed on the jostling vehicles all around.  I know we’ve made progress in that the days of profligate taking of wildlife are distant history and that all now know the value of a wetland.  But of the teaming mass of humanity crossing that bridge daily encased in a couple tons of steel and plastic, who gives a thought, or recollects in a quiet moment, or perhaps reads once in a decade anything about how much farther we must go?  It is a tough message to broadcast widely and tougher yet to expect an effect these days–that something like a quarter to half of the species in major groups of organisms–mammals, birds, freshwater mussels, and so on–are not in the best shape as far as population size and amount of habitat go.  They aren’t endangered yet, and so become like any background piece…unnoticed until the music stops.  Transportation infrastructure, about which the Governor and legislature are tussling, is in a similar boat: pretty much asked to keep on working despite wear and tear until everyone realizes there’s a big problem.  Except that ducks and the uncommon wild things of the world don’t have the attention of every commuter traversing the Minnesota River marshes on a bridge which, if unattended, eventually must fall down. – Kim