May 29, 2015.  Reading in today’s Detroit News that the food industry—comprised in growing part of growers who deliver not just fruits and vegetables for which Michigan has always been famous—but also meats, salsas and sauces, pickles and breads, honey and jellies, and a product of which we are particularly fond, craft beer—Michigan’s food industry employs one in every four workers.  The article purported that this industry’s “protective diversity”, as Jim put it long ago, is due in large part to microclimatic effects and a variety of soils found here.  Having worked in Michigan for a dozen years, studied its peaty, acid bogs abounding in highbush blueberries, the expansive wet meadows that became the muck farms supplying urban areas with fresh vegetables, and the moderating influence of Lake Michigan’s weather, I agree.  Michigan is uniquely positioned to be a food giant, and in fact, is number two after California—with $100 billion worth of food products, processing, and services, according to the Detroit News. 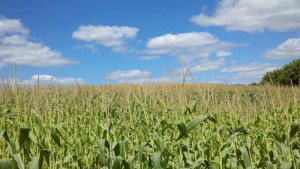 Corn to the horizon in Spring Lake Twp., Minnesota–as across the Corn Belt of the Midwest (Photo Kim Chapman)

Years ago I took an ecology course and had my eyes opened to the fact that the modernization and industrialization of agriculture was necessary to feed a burgeoning population…then about 4.5 billion worldwide, now about 7.3 billion.  Well…other information makes me doubt that to some extent.  For example, you could could give the entire Des Moines region—about half a million people—all the protein and calories it needed on 50,000-500,000 acres, depending on the amount of meat eaten.  The entire state has only 3.1 million folks, and the land base to sustain them would be paltry.  So, I would ask, why is 86% of the state’s 36 million land acres dedicated to food production?  For that answer, read Michael Pollan’s The Omnivore’s Dilemma.  There you would read that a) Iowa and other Midwestern food-producing states abandoned the idea of feeding themselves when, over the last few decades, they began growing mostly corn and soybeans, b) all but possibly a tenth of that harvest is actually eaten by people, c) the rest feeds instead a vast industrial production machine consisting of converters of carbohydrates to protein (pigs, cows, chickens, turkeys), converters of carbohydrates to fuel (ethanol), and converters of carbohydrates and other parts of the plants to industrial and food necessities—oils, starches, sugars…an amalgam of chemical constituents destined for the production line of modern living. 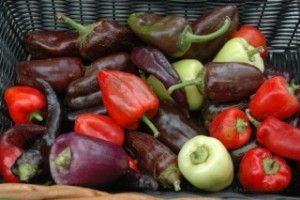 Peppers for sale at the Winona Farmers Market 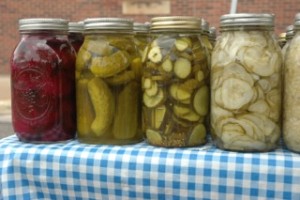 Pickles for sale at the Winona Farmers Market

Meanwhile, the local food movement grows, a throwback to an older time in America, or a modern time in France, maybe.  The two models of how to grow and use the fruits of the land exist side by side—and I wonder, toward which direction will the wind blow in the next twenty years?

In our essay, “Out of the Darkness, Light,” I refer to one of the solutions to our current dilemma:  “…the idea of conservation rooted in local community concerns. In order to supply the needs of people who, for multiple generations, have lived in one location, a different view of living is required. Communities and individuals across America are experimenting with techniques based on principles of self-reliance and local control. Examples abound: buying fruits and vegetables in season from nearby growers, revitalizing brownfields made worthless and discarded in a previous fit of economic endeavor, preserving green space amid congestion, valuing and conserving the plants and animals that elevate a mere city or farm to an intriguing bastion of biodiversity, and so forth. Really, this is nothing more than a return to the “Neolithic village” of our origins, where everything you valued was of necessity found within traveling distance on foot—long-distance trading in exotic materials being a tiny fraction of the economy of the day. It doesn’t matter that this village is located in the heart of New York City: it could and should operate to the benefit of the people living there, who control their own environment and destiny.”  – Kim