Just Talking…About Being in Kalamazoo 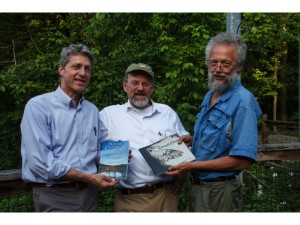 Kim and Jim with artist and friend Lad Hanka, Kalamazoo, May 26 2015. (Photo by Susan Andress)

May 26, 2015. With some 110 people in the audience at the Kalamazoo Institute of Arts, we delivered our first readings from the just-printed book of essays, poems and collaborations Nature, Culture, and Two Friends Talking.  Part of the draw was our longtime friend, Ladislav Hanka, a regionally known artist whose work is exhibited and sold for its complex and creative depictions of the natural and human world.  In this instance, we read “From Darkness, Light”, wherein an ecologist (Kim) and poet (Jim) discuss, via email, the intimations of beauty and ecology in Lad’s work.

After the reading, the audience asked a couple of questions.  One struck us in particular:  What can one do to counteract the natural reaction of feelings of depression and despair in the face of so much bad news about the environment and people’s role in that damage?

Jim answered first.  He pointed out that the history of the planet is punctuated by catastrophic changes, and if we have caused this one, it doesn’t mean we’re not part of nature–we are a product of the ever-unfolding processes in the natural world.  In other words, our effects are part of the whole.  At the same time, Jim remarked, it is useful to remember that Earth will abide, as it has for billions of years despite catastrophe, with or without people.  We shouldn’t fret for the Earth itself.

Lad followed with an expression of hope through his art—by making art, he brings all his thoughts about the problems and solutions to the nature-culture divide into view.  And that is satisfying and perhaps helpful.  At least it keeps him occupied with what can only be described as a type of crusade of problem-solving through artistic output. Lad also said one should get out into nature and be in the present with it, rather than just think about it.

Kim wrapped up by saying there are signs that some things are changing—though perhaps not fast enough for some—and changing for the better. Many in the younger generation are aware and understanding of the need for change, while some in our generation and older are working on the change itself—finding economically viable ways of shifting the cultural-technical-economic bubble we have created for ourselves (created presumably to insulate ourselves from nature’s caprices and catastrophes)—to a new state of collaboration with nature.

Later, as we signed books, a woman came up to Kim and said, “I used to worry a lot about all of this, mostly because I felt so powerless.  Then I heard someone on the radio talking about how he coped:  by constantly reminding himself to set an achievable goal and stay the course.  That’s how you do it—just give yourself a task that you can do…something that fixes the problem—and don’t stop.”