November 14, 2015.  Watching the horror unfold in Paris yesterday, reminded of the many horrors visited on the world regularly, I can’t help but feel that writing about a bird is a trivial, perhaps even disrespectful thing to do.  But that is what I intend to do now.  I was at McCormick Place last weekend and, surrounded by a few thousand fellow conference attendees, I was paid a visit–or rather, McCormick Place was visited by an unusual bird weighing less than an ounce.  I was standing in the cavernous lobby near the walkway to the hotel and other buildings west of the Lakeside Center, under the massive, black steel overhang that characterizes this 1971 building, and out of the corner of my eye I saw something move. 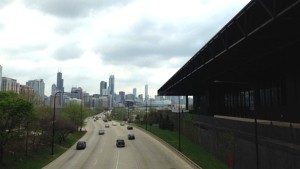 Something fluttered up against the glass then dropped out of sight and onto the horizontal beam above the door.  I had glimpsed a curved bill on a brownish bird and said to myself, What are you doing here?  On one side of the creature, a massive steel and glass structure with a vast overhanging roofline, and on the other, Lakeshore Drive with thousands of cars a day passing by.  Not the best place for a migrating bird.  It was late for migrants–but this species just moves a little north and south in spring and fall, and it is one of the first and last of the migrants to come through, so it wasn’t a disaster to be late.  Of course it prefers to move through verdant terrain, but birds in migration travel through inhospitable lands and over water if it is necessary to get where they need to go.  For this bird, though, it might have become a disaster if it got stuck in the corner where the walkway over Lakeshore Drive meets the walls and overhang of the building.  Since I didn’t know what the outcome would be, I decided to do something about it.

I propped open the door to the outside with my briefcase and, standing on the door hinge, reached for where I thought the bird was.  It flew and landed on the ground in the corner of the glass wall and walkway.  I approached slowly, bending low, and with a slow movement of my hand from behind, managed to catch it and clap my other hand over it to form a hollow.  It piped several times, then went quiet in the dark of my cupped hands.  I stepped inside and asked a nearby woman to slip my briefcase strap over my head–she was puzzled that I didn’t do it myself and must have wondered why I was praying.  No matter.  I then walked the few hundred feet across the crowded lobby to the opposite side of the building where the big lake was, praying all the way, or so it must have seemed to people who noticed me.

Outside, near the lake, I stopped by a copse of crabapples and opened my hands near the base of one of them.  The bird didn’t move.  I waited.  It opened its eyes briefly, then closed them again.  Stressed out, I thought.  I nudged it with a finger and it flicked toward the tree and landed.  This bird, a brown creeper, walks in a spiral up the trunks of trees (passing nuthatches who walk down).  He walked up the trunk a bit, then stopped.  After admiring it for a while, I took this picture. 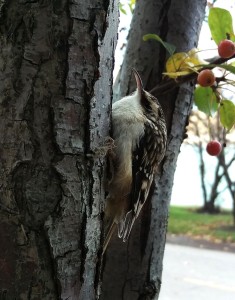 Then back to the conference I went, wondering what would become of the bird.  I returned a couple hours later–the brown creeper was gone.  Ironically, the area just south of McCormick Place–a couple hundred feet from where I first saw the bird–that area is a “bird sanctuary.”  Maybe that’s where he went.

This was a small act of kindness.  It required only that I noticed something, projected my human compassion onto another creature, and acted.  Many would find this silly or strange to expend energy on such a thing.  Against these charges, I take solace in this:  if I have the capacity to consistently notice and care for the little things in life, does it not follow that I am training myself also to notice and take care of the bigger things in life–at least those things I am able to take care of?  I can’t write this without thinking of Pope Francis’s similar thoughts in his letter, On Care for our Common Home.  It is through small acts of generosity and kindness that a person’s character is proven; and the small or large acts of hatred and violence against others suggest lack of experience with taking care of the small things.

On the other hand, didn’t the villain Dr. No have a pet cat always on his lap? And didn’t Hitler love children and dogs?  For all we know, Abu Bakr al-Baghdadi, the monster at the helm of Daesh who unleashed the dogs of war in Paris, has a fondness for small birds.  I doubt it…but you never know.  On the other hand, I know that if I hadn’t helped the brown creeper at McCormick Place, I would have recalled it with regret even years hence.  It was another of those moments that define you.  Faced with that, no matter how trivial the act, you must decide and act, or live forever with the knowledge of a small but telling failure. – Kim