January 9, 2016.  One day this week I spent twenty minutes watching an immature red-tailed hawk trying to catch squirrels in my back yard.  I first noticed him out my dining room window—if you have never seen a red-tail, they are quite impressive:  they have a 40 inch wingspan and weigh up to a pound and a half (which is a lot for a bird).  He flew across my snowy yard and sat on a fence post near where I store my canoe.  He seemed to be staring obsessively at the ground.  At first I couldn’t figure out what he was doing—then I caught a glimpse of a twitching tail:  a young gray squirrel was at the base of the post, protected from the hawk by the gunwale of the canoe.  “Poor squirrel!” I thought.  The hawk then flew up to a branch of the old walnut tree that dominates our back yard. From the window I took a closer look and saw another young squirrel confronting the hawk, quivering with perhaps anger or fear (or both).  The little squirrel dashed back and forth, edging to within a foot of the hawk, who regarded the squirrel with a cold, predatory stare.  To see the gyrating squirrel, the hawk had to turn his head completely around and almost upside-down, a rather comical look for a predator.  I reacted again with fear for the squirrel.  I suspected, since he was a young squirrel, he didn’t know the danger he was in. 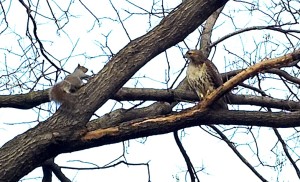 Suddenly I noticed there were many squirrels, on various limbs, all chattering angrily, all very exposed on the tree.  Were they crazy?  Then I realized the truth:  the hawk is huge, like a B-52 bomber.  He is built for dropping from high in the sky onto prey in open fields.  He may be strong but he’s not quick or maneuverable enough to nab these squirrels inside the tree canopy, and they knew it—they were taunting him.   A squirrel then climbed up to sit on a fence post, twitching his tail like a matador’s cape.  Enticed, the hawk flew at him but the squirrel skittered nimbly down just ahead of the talons.  The hawk landed on the fencepost and ruffled his wings impatiently.  Then he flew back to his tree limb as a trio of squirrels scolded him—or was that mocking?  Perched in the tree, the hawk was harmless. One squirrel circled the trunk around and around, stopping from time to time almost within reach of those wicked talons, yet the hawk could do nothing except stare. Eventually he flew—slowly and majestically—and perched on the chimney of the old mansion two houses away, turning his back to us all.

I came away with new respect for the squirrels’ intelligence and impudence—they were telling the hawk, “Hey, you’re in our neighborhood now, buddy, and it takes more than brute force to catch a squirrel.”  As long as they were in their arboreal niche, they were superbly adapted to escape death from the skies. – Jim