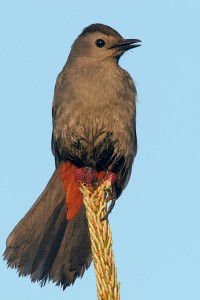 April 21, 2016.  Our resident superstar, Prince, died this morning about thirty miles west of here, and I am pondering how decisions by each of us, individually, affect the big, beautiful, blue-green world.  His particular genius required he stay out of the common limelight, out of pop magazines, and in a purple world of his own creation—all the better to work his particular brand of magic.  Thinking of his enclave in Paisley Park reminded me of a lilac thicket at the main entry to the university’s St. Paul campus, a spot I passed daily walking to classes over a decade ago.  One May a gray catbird took up residence and stayed the summer.  Hundreds of cars and buses, thousands of students and college workers, passed there every day—and the catbird, sitting in the catbird seat deep in the lilacs, sang on.  If you’ve not heard a catbird, it makes an upward-downward ree-ayr, like a mewling cat, but the best thing it does is not repeat the same thing twice.  It takes bits of other bird songs and noises from wherever, adds odd notes here and there, and keeps you pretty engaged listening to it.  What a memory a catbird must have to produce that variety of sound.  It’s in a group called the Mimidae, or the mimics, which includes mockingbird and brown thrasher (the bird of a thousand songs).  The catbird is not all gray—there’s a rusty colored patch on its rump and males have a slightly dark cap.  Here’s a recording of a catbird I made on the Gateway Trail–biking with William.  (A song sparrow also occasionally pipes up.)

The catbird symphony, a regular part of my day, was not to last.  Some time later that summer the grounds crew was given the all clear to clear all the lilacs and replace them with a Big Ten-looking planting of showy flowers and scattered low shrubs.  Not surprisingly, no catbird after the change.  Nor one the next year, or the next.  That particular arrangement of lilacs and trees suited the catbird just fine, but the make-over didn’t.  In my wanderings about campus, I heard no other catbird—apparently that was the one place thereabouts where a catbird wanted to live.

The wish to alter one’s surroundings is universal–for an artist, it is to keep creativity flowing, and for ordinary folk it is to make life a little better.  My neighbors, for instance, have in the last year created a new world all around me—each making changes in his or her own yard to fit a personal vision.  One neighbor replaced tangled shrubs with small, neatly-arranged plants.  Another also removed the shrubs, including a rabbit-inhabited raspberry patch.  On three lots behind and nearby, large trees were cut to let more sun shine on the lawn, or because the trees were going to die anyway, someday.  I’ve not lifted a finger, yet the world around me has changed in ways I’d rather it hadn’t.

In the aftermath of my neighbors’ uncoordinated and entirely reasonable modifications, the tree canopy hereabouts has been lessened by a quarter.  Shrub cover—the big missing ingredient in urban ecosystems—has also shrunk.  Having studied bird responses to vegetation changes, I knew this would shake things up, as far as birds go.  To compensate, my wife and I went on a shrub-buying binge.  Most made it through the first winter, but they are small, despite their big price tag.  It will be a while before what was lost will be restored.

Each person making decisions until the entire world is changed.  That is how it is, and how it always has been at some level—though city planning and zoning regulations do help decisions get made according to agreed-on standards.  We’ve learned over time to prevent serious land use conflicts and have, through elected representatives, created a system of development rules mostly to protect the quality of people’s lives and their livelihoods.  What remains a distant mountain to climb is for everybody to have a basic understanding of ecology and to know the effect of their individual decisions on the environment.  That’s not much different than wanting everybody to know how American democracy works, or how to keep oneself healthy.  How to balance a checkbook, drive a car safely, and all the other routines of western civilization—it would be nice if ecology were part of that mix.  My neighbors might have known that to keep a catbird, house wren, or other wilder thing than house sparrow and robin, you need a little habitat on a few adjacent lots.  Instead, what my neighbors have accomplished, sensibly and with good intentions, may play out this spring unhappily for me.

Well…although bird activity seems diminished in my yard, the annual sapsucker pilgrimage still took place and the red pine was duly visited.  In a week or two we’ll see the first wave of warblers and other migrants from South and Central America.  Among them, I hope, will be a Swainson’s thrush.  I’ve heard one every year for over a dozen years.  He spends a few days in the back yard, running from shrub to shrub, perching momentarily on a low rock, and enchanting me with his double-noted, slurring song—a sound heard here for one week each year, because the rest of the time he lives south of the Gulf of Mexico or in the north woods.  Prince was lucky—he sat in his own catbird seat, surrounded by acres and acres of his envisioned world, buffered against the small decisions of his neighbors.  All his neighbors, making their isolated decisions, changing everything. – Kim