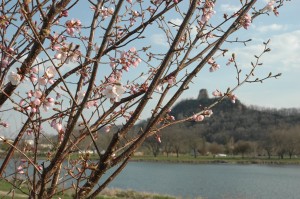 April 17, 2016.  This is a photo of a cherry tree in bloom, under the river bluffs of my hometown, Winona, Minnesota. The sight of blossoming cherry trees is not unusual in spring, but this tree is: it is a gift from Japan. In 2012, Winona was one of 36 cities across America chosen by Japan’s Consulate General to receive a group of Sargent cherry trees.  This was in commemoration of Tokyo’s gift of 3,000 trees to Washington D.C. in 1912. Those cherry trees and their annual blossoming became such a fixture of Washington life that when it was proposed that many of them be cut down to make room for the Jefferson Memorial, a group of women actually chained themselves to the trees to protect them.

In celebration of the centennial of that original gift, representatives from our sister city of Misato came to Winona and we held a dedication ceremony, during which the trees were presented and my daughter and a friend sang a Japanese song, “Sakura,” which describes the custom of viewing cherry blossoms in spring. Many of the Japanese delegation sang along–the song is famous because for hundreds of years the Japanese have gone out in the spring to picnic under the falling blossoms and to meditate on life’s beauty and brevity—a custom they call hanami. The combination of both beauty and fleetingness is central to the Japanese idea of nature. The feeling it elicits is called mane no aware, which is defined as a consciousness of the transience of things and the resulting gentle sadness at their passing—as well as a deeper wistful recognition that this is the primary truth about life itself.

As a result of this custom of philosophical meditation, cherry trees have been planted everywhere in Japan—in spring, pink clouds of blossoms are ubiquitous, both on wild mountainous hillsides and on urban boulevards. It is an interesting example of the intimate connection between nature and culture. And now these same cherry trees have come to colonize Winona, though I wonder how many pragmatic and optimistic Americans realize the underlying melancholy of their symbolism. I keep careful watch over these trees in the spring, and each year I have photographed their blooming and posted it on Facebook so our Japanese friends in our sister city can see the trees performing their delicate Japanese ritual of blooming and fading. Every year I have vowed to picnic under their blossoms and write a Haiku. So far I have always been too busy—a bad American habit. – Jim