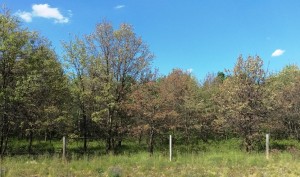 June 8, 2016.   Several weeks ago I drove from St. Paul to Alma, Michigan for the service of my wife Elizabeth’s step-brother who died recently.  I wrote a few words to open the service, which got me thinking about mortality and resurrection.

I was a bit surprised when, heading east on I-94 a short distance from the Twin Cities, I began seeing what I thought were dead oak trees. Not just one or two, but lots of them…dead.  What in the world was going on?  At first I wondered if there’d been a wildfire—but other trees and shrubs were leafing out so it wasn’t that.  Then I wondered if it was a disease; surely I would have heard about that from the swarm of wildlife biologists, foresters, and others managing our natural resources.  There actually is an oak blight on the West Coast, brought to us by an energetic global commerce spreading diseases and pests and helping the demise of many other tree species—chestnut, elm, hemlock, beech—but that’s a story for another day.

Then it hit me. The oaks weren’t dead, the oak leaves were dead.  There’d been a hard frost around May 13 east of my home, and the low ground I was now traversing had concentrated the cold.  I’d learned about that in an ecology course taught by Richard Brewer.  It’s always colder in a landscape’s low places than on the hilltops because cold air, being heavier than warm air, sinks to its lowest level.  It’s called “cold air drainage”—an obvious term, but one few have heard.  We actually measured it.  We walked from a hilltop in a field to a drainageway that led to trickling ditch in a thickety woods.  Sure enough the field at the top of the hill was hot, the ravine and then the woods were cooler—maybe four or five degrees Fahrenheit.  During the nights of May 12-14 the temperature across the upper Midwest plummeted and low areas got even colder because the heavy cold air rolled on down the drainageways and puddled up in the low places.  That explained the sharp lines of dead leaves on slopes—at the bottom all the leaves were brown (“and the sky was gray”), then part way up there was a sharp line with brown leaves below and green above, and on ridgetops the leaves were untouched. 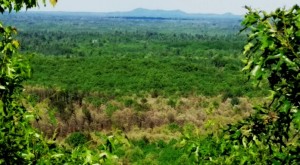 The oaks (tan area) are in a low spot on the landscape. Cold air drainage killed their leaves while leaves on higher ground kept on growing. Photo K. Chapman

I’d seen this before, in June 2000 while collecting bird data in the north Metro. Driving around my study area, all the oaks appeared dead—immense oaks, like brown lollypops in a green world.  There had been a leaf-killing frost on May 19 that year which hit the white and bur oaks hard.  Driving to Alma sixteen years later, I put two and two together.  Like the frost in 2000, this leaf-kill also followed a very warm spring.  This time, though, it was associated with the second strongest El Niño on record.  March 2016 was hotter than normal, stimulating the oak leaves to emerge early.  By May they’d grown beyond their protective leaf bud scales and become easy marks for Jack Frost.  Minnesota sits at the north and west edge of the range of every oak species in the eastern United States.  Bur oak—a dwarfed version of the giant found in Michigan’s river floodplains—makes it the farthest, but otherwise the oaks pretty much end in eastern Minnesota.  And I see why:  Minnesota is a volatile place, weather-wise, with a single-day temperature swing of 80 degrees happening every couple years or so.  On a broader scale, the greatest temperature rises since 1980 occurring in the lower 48 are happening in Minnesota.  We have the most to lose in terms of the Arctic air conditioning we’ve enjoyed as white settlers for a couple hundred years, and in the previous several thousand years as Indian settlers.  All us settlers arrived here in a benign climate (my daughter would point to our winters and argue with that word, “benign”); but our springs and falls are gorgeous and temperate.  That’s changing.  We’re seeing greater numbers of warmer nights and more frequent northerly deflection of cold air masses.  That means fewer strong Canadian cold fronts that clear out the humidity and give us those comfortable sub-70 Fahrenheit sleeping nights.  (Minneapolis on average has only ten 90+ degree days a year, compared to 34 in St. Louis.)  That means we’ll be running our AC a lot more, adding to the carbon burden of the atmosphere, and perversely making our nights even warmer.  And though people not from here find our winters bitterly cold, that cold has done us a great service by damping down outbreaks of viruses, bacteria, and pests that plague wildlife, livestock, crops, forests, and people alike.  We will lose that protective cushion and become like places farther south—besieged by Africanized honeybees, Zika and West Nile virus, kudzu, water hyacinth, fire ants, and the like.  It’s coming our way in the next fifty years.  We’ll have a climate like Missouri, with many 90-100 degree, high humidity days—unbearable weather forcing us to live in air conditioned houses and cars most of the time, as people do throughout the South. (A carbon-free AC set-up would help.)

These thoughts came to me driving by the frost-nipped oak leaves.  The good news is, after apparent death comes the resurrection.  Oaks have a storehouse of sugar in their roots, even after the first leaf-flush, allowing them to regrow leaves, survive another summer, and replenish energy stocks in their roots (though they may not fruit as abundantly for turkey, deer, blue jay and others that eat acorns).  As for climate change, in the long run the oaks will migrate north because weather patterns will become favorable there.  Where I live, May and June frosts may be extinguished once the Arctic ice is in scant supply, and parts of the northern forests will become farmland and peppered with deciduous trees.  Oaks will be happy, I’m sure.  But for people who like relative stability in climate and ecosystems, hold on to your hat.  – Kim