A lady moose losing her winter pelt on June 1, in Ontario. Nutritious new leaves are a big improvement over what she had to eat over the winter. Photo B Cameron.

July 13, 2016.  After some years of research the wildlife biologists at the University of Minnesota and Department of Natural Resources are sketching an outline of reasons for moose declines in northeastern Minnesota.  Thirty years ago on the other side of the state, in northwest Minnesota, moose numbered 4,000, but by 2008 for all intents and purposes they had gone AWOL there.  In northeast Minnesota, where you can still find them, numbers have fallen by half since 2009, to approximately 4,000.  My wife’s dearest dream has been to get a good, long look at a moose somewhere on the Gunflint Trail…or anywhere for that matter.  We drive the Gunflint two or three times a year, never sighting moose, and hear, of course, that the very next day a friend or acquaintance of a friend spotted a moose where we had been a scant 24 hours earlier.  Likewise, in the Boundary Waters or Quetico, despite hundreds of hours portaging, paddling, and camping there…never a moose.  How is this possible?

It’s the Fates, of course, deigning that we should be at a moose sighting location always some hours before the moose is scheduled to arrive.  Whether you believe in fate or not, or adhere more to the idea of the universe as a random number generator, not sighting moose might be related to moose numbers.  Something is going on to drive moose numbers down.  Everyone knows that.  It’s been measured.  People are not arguing that point.

What they are arguing about is the cause of declines because, once a problem is known, somebody will want to do something about it.  That is our way as a species—fix the problem, hopefully without unintended consequences.

Hunters for years have said, the cause is wolves, whose numbers have increased since the 1970s after protection began.  The argument is that wolves are gobbling up all the moose.  Fair enough, and it seems like a reasonable hypothesis.  Meanwhile, conservationists have pointed to the deer population, which is ten to twenty times higher today than in the 1800s when hunting was year-round and before the industrial-scale logging of the Lake States changed the forest.  Deer numbers were quite low in the 1800s because there really wasn’t much food to eat, especially in winter, the starving time.  With the cutting and conversion of a conifer-rich forest to an aspen-birch system with grassy openings, suddenly deer found conditions much more to their liking.  Even with today’s hunting, which removes several hundred thousand deer from the north woods each year, there still remain so many deer that moose come in contact with them quite often, and in so doing, seal their doom.  This is because deer are infected by a parasitic worm which lives benignly in their brain and spinal cord, and whose larvae are spread in the deer’s feces.  The intermediate host, snails and slugs, inadvertently pick up the larvae, and if a moose happens to eat one while feeding on plants, the worm move to the moose’s brain, but with much different results.  Moose have no tolerance for this organism, and eventually the worm causes disorientation and other behavior changes, and ultimately death.

Conservationists for decades have been saying, if you want a moose population in the Lake States, you have to have less aspen-birch forest and fewer deer.  This upsets hunters and loggers because they like a lot of aspen and birch and an overabundance of deer.  That also makes it possible to earn a living as a logger, cutting pulpwood for paper, or to ensure that one’s nephew or daughter nabs that buck on their first November hunt.

Big changes in the north woods from the late 1800s to now. The yellow of aspen-birch forest in the modern map has replaced the greens of the conifer-rich forests on the presettlement map. From Cole et al. 1999 USGS “Historical Landcover Changes in the Great Lakes Region”.

Now into the political mix come the scientists—confounding the stories told at the kitchen table or around a campfire.  The scientists who most recently put radio-transmitting collars on moose now have a story that is more complex, as always in the real natural world.  People’s wish to latch onto a single explanation is universal.  We can understand it, we can tackle one cause by changing a law or putting in place a change in behavior or a best practice; but when you have an ecological system with multiple forces at work causing the decline of moose…well, where do you begin?  It’s simply too much for most people to deal with.  Part of the problem is that in American society there always has been a strong undercurrent of anti-intellectualism, described eloquently and persuasively by Richard Hofstadter in the 1960s as our democratic inheritance.  In a democracy, you don’t completely trust the experts because, what do they know about real life?  They’re eggheads, they live in ivory towers, they get mired in details, and they don’t use common sense.  But, in fact, the experts in our society have been quite helpful at raising our living standards and addressing society’s pressing needs.  Despite that, political movements that take advantage of the natural distrust of experts by the American (small “d”) democrat, have a consistent place in our nation’s history and development.

Be that as it may, scientists, those experts, are now getting into the act with a lot of data.  What they tell us is that changing weather patterns, disease and parasites, and the moose’s own physiology—its way of taking in food and regulating its internal biological processes to carry on life—are intertwined and responsible for the shrinking moose population.

In a nutshell, the story begins with 23 degrees Fahrenheit.  Winter temperature is a major driver of moose decline.  It’s been known for thirty years that 23 degrees is an important threshold in moose physiology, but it hasn’t yet been brought into the conversation.  Twenty-three degrees is the temperature at which moose start panting in the winter.  This is because moose, adapted as they are to a frigid northern climate, have a remarkably well-insulating winter pelt which they shed by summer.  When temperatures get above 23 F on a winter’s day, moose have to head for the shade, lie in snow to cool down, and stop moving around—to keep their body from heating up as they use their muscles.  But if they lie still to prevent overheating, the winter food they consume cannot support them.  In winter the only things to eat are buds and small twigs.  If you’ve walked around moose country after the snow melts, you find hard oval nuggets of moose scat all over—that’s the material which moose cannot digest, having extracted a tiny amount of nitrogen and other nutrition and passed the wood along.  If you’re a thousand pound moose, you need to eat 10-20 pounds of twigs daily to keep yourself going, and even then you’ll lose weight over the winter.  But as long as the temperature stays below 23 F in the daytime, a healthy moose can eat and digest enough food to make it to spring, when better food becomes available.  If above 23 F, it has to stop moving and lie in the snow to cool off—or it overheats.  When a moose heads for the shade, though, it’s not eating, but if it keeps eating, it uses precious energy to pant and stay cool.  If there are too many hours above 23 F for too many days, a moose will starve. 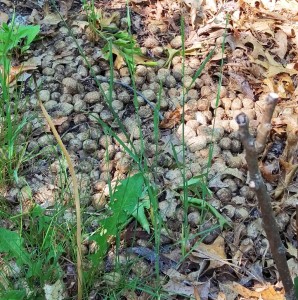 A moose went to a lot of trouble to relieve itself 300 feet up on Bell Mound, at the rest stop SE of Black River Falls. These woody pellets can be seen in moose country, after snowmelt. Photo K Chapman.

In this weakened state, the ticks that always cover moose begin to take their toll.  They’re removing blood, which in a healthy moose wouldn’t be a problem, but in a starving moose pushes it closer to death.  In a weakened state a moose is also less likely to escape a hungry wolf.  Lastly, coming out of the winter in an unhealthy state means that moose parents are less able to bear or care for young—it takes a lot of energy to fend off a hungry wolf intent on eating your calf.

These things are all interwoven in a complicated pattern, a pattern which speaks the truth about all species on earth.  Many factors cause species to survive or disappear, and humans cannot comprehend every species’ story—there simply isn’t the time.  Look at the millions of dollars spent to understand the decline of moose in the north woods, and the thousands of gallons of hot air expended talking about it, not to mention hundreds of pounds of ink shed to report everybody’s opinion on the matter.  What about the other ten million species on Earth—can we know their story and manage them all? 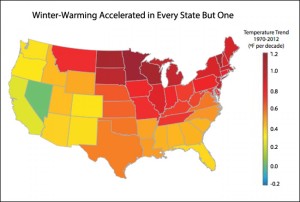 Just the facts, ma’am…winter temperatures are rising fastest in a region centered on Minnesota, says the US EPA.

One final word from the scientists does not bode well for moose in northeast Minnesota:  they do not migrate.  You’d think moose would march north in pursuit of cooler temperatures, but they just slowly disappear, like candles burning out one by one at the front of a church.  They wink out in place.  That’s what happened in northwest Minnesota.  Now we’ve seen a decade’s decline in northeast Minnesota.  It is likely that in several decades, with a predicted temperature in the Lake Superior region of 5.5-8 degrees F higher than today, there will be no moose in Minnesota—especially since winter temperatures are increasing faster than summer ones.  This isn’t alarmist talk, it’s simply a statement of fact.  Why not know what is coming and adjust to it?  Simply acknowledge the story emerging from the data, and make a decision about what to do with that.  Do we or do we not want moose?  Or are the forces marshaled on either side of the issue so powerful and loud, that it comes down to who has the most power to force a decision?  It’s a simple decision—or rather, because it’s political, it’s more like a simple choice.  In the end it is a decision that will be made deliberately, or by default if we simply let nature take its course. – Kim