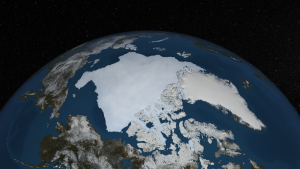 May 9, 2017 (Winona Daily News).  On a recent Saturday a two hundred people walked in the rain to remind fellow Winonans that climate change is a clear and present danger. They did so because they trust scientific evidence. In this sense their march was merely a continuation of the March for Science the weekend before. How did we get to the point where belief in scientific data has to be the subject of a march?

The answer is that we live in a moment when science — long the driver of our industrial civilization — has become an impediment to the financial interests of that civilization. Paradoxically, while it was science that gave birth to the industrial age, many scientists are now trying to tell the industrial world to slow down, to put on the brakes, take heed. Business leaders who profit from the industries implicated don’t like that one bit. And their response has been to cast doubt on science.

The reason that science is vulnerable to such an attack is the obscurity of its process. At its core, the mission of science is to make visible what is usually invisible, due to scale or distance. Using instruments and experiments, scientists try to make the opaqueness of nature less so by extending human perception. This extension promises greater security for human life. But the process involves a complex network of instruments, data, mathematics, technicians; it requires experimental protocols that become lab reports and then have to be verified by publication in peer-reviewed journals. Science is above all a massive organization of humans united by a respect for a specific mode of inquiry and stringent standards of proof.

You benefit from this organization every day:  the devices and systems you depend on for your livelihood and your daily comfort — even your survival — would not be possible without the ability of science to go beyond “common sense” into realms that are only penetrable with their laboratories, personnel and equipment. Most of the time we let science do this complicated work and we simply enjoy the results. When we do question scientists, it is because we find their results disturbing or inconvenient. Suddenly we take an interest in the process —what is going on in those labs? Whose side is science on? The complexity of their world can make us frightened and even paranoid.

Just one indicator of changes in the planet’s climate–summer cover of ice in the Arctic Ocean. Predicted change is the black line and blue area, and actual measured cover is the red line. Data from Stroeve et al. 2007 (based on IPCC report).

Put it this way: you never question your doctor after a good checkup. You assume the doctor is competent. But when the doctor brings you bad news you have several choices. You can believe the doctor and work with her to develop a strategy (say, losing weight, exercising, taking statins). Or you can find a different doctor. There are always doctors willing to give you a second opinion. But not all opinions are equal. The internet is jammed with ads for miracle cures and alternative therapies. In like fashion, the internet is full of sources—credentialed, pseudo-credentialed, or just opinionated people— willing to spin, twist or outright deny the frightening data of climate science. They all share the same defect in their arguments: they don’t take into account the preponderance of evidence. They cherry pick data, or misquote sources, or blur conclusions. Some actually believe their own fabrications (as there are fraudulent doctors who take their own medicine). Others are paid quite handsomely to deceive by the fossil fuel industry and by the conservative think tanks whose ideological aversion to government action makes climate action a non-starter. In fact, the latter have constructed entire networks of “Potemkin science” — papers which mimic those produced by actual researchers but prove, when interrogated, to be flimsy facades.

One example of this kind of “Potemkin science” is the column that appeared in the Daily News on Monday, May 8. It was written by William Balgord, who claims to head “Environmental & Resources Technology Inc.” in Middleton WI, and makes an argument against the Paris Climate Accord. Balgord is a member of the Cornwall Alliance, a right-wing Christian group funded, in part, by “dark money” from folks like the Koch Brothers. A quick search of businesses in Middleton shows no reference Balgord’s purported company, and he has no credible publications I could find — other than a lot of letters to local newspapers.

Within the institution of science, there is no significant doubt about climate change or its risks. Global warming is the best-documented phenomenon in the history of scientific research. It has passed every test, surmounted every objection so far. If you doubt the diagnosis —and it is a dark one — I understand your instinct to reach for the snake oil or the internet faith healer. But ask yourself who benefits from such nostrums? And whom should you really trust? The one willing to give you the straight news, no matter how bad, or the one willing to flatter your naiveté (for a price)?

It will take more than a march to restore this country’s belief in science. It will take the courage to face facts — all of them, in all their complexity — and the discernment to know who is worth believing. – Jim