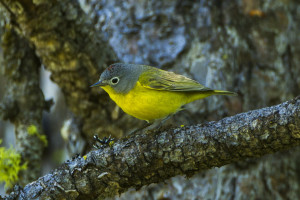 A Nashville warbler considers his next move. Photo Francesco Veronesi.

May 12, 2017.  Last weekend I predicted a warbler wave would arrive Tuesday morning.  It did.  All around when I stepped outside were the flitting forms of tiny songbirds who had traveled hundreds of miles in the night, taking advantage of a brief uptick in wind speed at their backs as they surged northward.  They’d arrived on the Gulf Coast a week before, to rest and fatten up a bit, then took the next big jump to their breeding grounds…and landed here for the moment.  Within earshot were a least flycatcher (a deep forest-dweller), the ethereal-voiced Swainson’s thrush of the boreal forest, and lots of Nashville warblers, pictured above.  It lives nowhere near Nashville.  It just happened to be first described and named by Alexander Wilson, the less-well-known bird-artist competitor of John James Audubon, while he was in Nashville.  I’d read the tea leaves–pages of my phenology journals, actually–and correctly predicted the date when the first wave of migrating birds from the tropics would arrive.

But I was also quite wrong!  For years I’ve used Tennessee warblers as my indicator of their arrival, and said so.  Because they have such a big voice, they’re easy to notice–so I’ve always pegged the warbler wave to first hearing their voice.  But this year and also last they’ve not been among the warblers, vireos, flycatcher, and others whose arrival I wait for all winter.  Last year, and it seems this year, too, they are laggards, showing up a few days to a week later.  In fact, they’re not here yet.  Several years ago I rarely heard a Nashville, and filling the trees then were mostly Tennessee warblers.  Now the weaker-voiced, but showier Nashvilles have to serve.  Their territorial call goes sippit-sippit-sippit-sippit-ts-ts-ts-ts-ts.  Not exactly a rallying cry.  I was half-right, anyway. – Kim