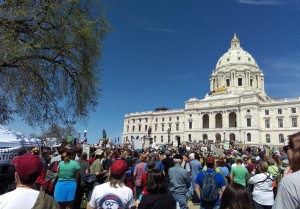 August 5, 2017.  It seems eons ago that I and ten thousand others walked from the St. Paul Cathedral to our state’s capital in St. Paul.  It was Earth Day, 2017, and a massive slice of the Twin Cities elite hell-bent for leather on the destruction of our society (to hear it told by right-wing talk radio hosts), decided to go against their personality type and let it be known that they were on a March for Science.

I don’t know how many of them there that day had been in a protest march before, but if they were like me, the answer would be few, if any.  Protest march is a little strong.  It was after all, a march for something, not against something.  Although as we walked down Summit Avenue to the gathering place at the cathedral, a jovial Fortune 500 type striding in jaunty, manly fashion down his mansion walk, with his voluminous family in tow, shouted to use from his front steps—“Down with science!”  Of course, we all laughed, knowing he was making a joke.  But at the same time, how did he know?  How did he know that we highly educated few had become an easy object of scorn by a substantial segment of the voting public?  Perhaps gut instinct led him to that knowledge, as with all good executives governed by their abdominal workings.

In any case, we were there to support, not offend, and one sign I think summed it up:  “When the introverts are marching, you know there’s a problem.”  My other favorite sign was, as befitting a bunch of nerdy people gathered in one place to extol their nerdiness, “This march would have been twice as big, but the control group had to stay home.”

Yes, there were the caricatures of President Trump as the enemy of reason, a climate denier, and statements like, “You can’t have opinions about facts.”  My liberal friends surrounding me pulled all the little shibboleths and stock phrases out of their kit bag to expose the foolishness of the anti-science crowd.  It was all there on display to either warm the cockles of your heart, or make you shake your head.

For me, though, I’d never been at such a thing before.  Not being an easy joiner type of person, I much preferring to be swayed by craft of argument and weight of evidence than the emotion of the moment.  All the same, an indescribable feeling kept dogging me—there above were the immaculate cirrus clouds presaging summer, the deep blue of a northern sky, the occasional puff of warm air on my face, the heads and backs of thousands spread out in a multicolored river before me, and the white dome in the distance.  The capitol, seat of our self-governance where the hopes that we, the people, have for our children, through force of political will and fairly enacted laws, will eventually become reality. – Kim