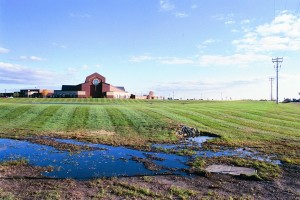 Plenty of sparrow and grackle habitat, and a whole bunch of mowing at this suburban Twin Cities church. Photo Kim Chapman

August 13, 2017.  A couple years before the housing market imploded, I was asked to design a residential neighborhood in a way that would protect one of the largest wildlife preserves in the Twin Cities region.  The development bumped up against the west side of Carlos Avery Wildlife Management Area, home to one of biggest populations of a kind of turtle the US Fish and Wildlife Service was proposing as a threatened species.  The turtle is called Blanding’s—after Dr. William Blanding, a Philadelphia naturalist who first described it—and sports a surprising banana yellow blaze, worn like a gaudy cravat on its throat.  It’s also notable for living a very long time, at least a hundred years.  (I wrote about this in a March 19, 2016 essay.)

Carlos Avery is a haven for other species of turtles, the usual countless red-winged blackbirds, marsh wrens, yellowthroats and yellow warblers, exotic creatures like cranes, rails, and bitterns, and a host of other weird-voiced birds, not to mention the hordes of frogs and toads with their deafening spring din, and the numberless dragonflies, damselflies, butterflies, bees and other insects.  It is a place full of life, all oriented to the water and marshland there.

The developer owned a few hundred acres right next door.  Because it’s private property and there’s no law stopping you from putting a house at the edge of a nature preserve, the developer had every right to build a subdivision there.  My mission was to help him build it in a way that didn’t intrude on the life of the nature preserve.  Among other issues were septic systems to treat household waste—did each house get one, or should we install a community system that used natural processes to clean the waste to drinking water standards?  We also needed to deal with the rain falling on roads, parking lots, and rooftops, which pours off those hard surfaces at a ferocious rate, destroying downhill streams and ponds by eroding their banks and loading them with nutrients that algae use to build their numbers up to distasteful levels.

In our business, applied ecology and ecological design, it’s always tough, it’s always painful to participate in the willful destruction of the natural world that development precipitates, but much worse is to stand by and watch as somebody with a different sensibility unleashes worse damage on the land, water and life of a place.  So I said yes.

We did a pretty good job.  By grouping the homes on smaller lots, narrowing and shortening streets, and eliminating stormwater drains, we kept the homes six hundred feet from the refuge, gave everybody open space in front and behind, and brought the wastewater to one facility that released clean water into a created wetland.  This saved all sorts of money because we didn’t have to clear so many trees or scrape and shape the land, didn’t have to install storm sewers—except at a couple road-crossings—or build long roads.  We had a plan to restore the ecological health of the oak woods and wetlands, and the developer and home-owners would pay for it.  Frontage of all lots on open space would bump property values by 5-10 percent, generating more property tax revenue, and the attractive, wooded setting would guarantee quick sales.  We were pretty pleased with ourselves.

City staff was skeptical because this hadn’t been done this before, but also encouraged us because they’d heard of this development style and were curious.  They had an escape-hatch provision in city ordinances we could use.  It allowed “planned unit development”—a flexible way to mix and match development strategies on unique properties to do something besides the usual cookie-cutter road and lot layout.

We ran into a bit of a headwind with somebody at the planning commission, but for the most part they liked what they saw.  So far so good.  We were then summoned to a special meeting just before our city council presentation.  At that meeting the city’s lawyer raised several last-minute issues, the most important of which was that it would set a precedent (but wasn’t that the point?).  The lawyer said if the city allowed the development, the city could be sued by someone wanting to do the same thing, but at a lower level of competence and performance.  It started to dawn on me that somebody in city council, and maybe the lawyer, too, just didn’t like our development.  Sure enough, at the council meeting our proposal went down in flames.  One board member said, “We are known here for our rural character.  That’s what we want to preserve.  We don’t want houses blocking our view of the distance.  One home on one acre—that’s what we’re known for.”  And that was that. 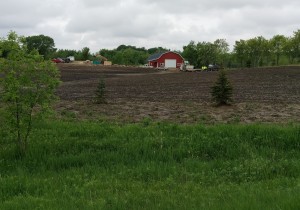 The idea that the rural environment is preserved with big lots makes no sense on so many fronts.  Let’s start with the ecological reasons.  The scientific literature is chock full of papers on the ill-conceived wisdom of “exurban development”—the most common style of development in America.  Anything from half an acre to a few dozen acres is exurban development.  This type of expansion spreads the damage we cause when expanding our living space to a much larger area than necessary.  Every house at city’s edge, in the country, north woods, or near-wilderness—every house carries with it a burden of harms to the natural world.  There are cats that roam the surrounding woods and fields gobbling up the food base of small mammals and birds.  There are the plants brought in to ornament the house, which often spread from there and overcome the larger variety of plants in nearby natural areas.  Then there’s the noise and visual disturbance of lawnmowers, bicycles, and off road vehicles, and the comings and goings of cars and delivery vans and garbage trucks.  And there’s the fact that, if you put a house in the forest, you open the forest to predatory crows, grackles, raccoons, and cowbirds—these last are sneaky parasites of songbird nests who, through evolutionary guile, have figured out how to get another species to take care of their young after laying an egg among those of the unwitting surrogate parent.  I should toss in the problems that exurban homes pose to crews trying to put out wildfires—people risking their lives and dying to protect a house in environments prone to wildfire—which is a lot of North America.

If you’re not in a firest—in grassland or savanna—cats wipe out the ground and shrub nesting birds and eat up the small mammals that hawks and owls depend on.  (Dogs have similar effects, but not as severe as cats who hunt for hours to entertain themselves.)  If you fill your grassland lot with trees, the grassland species shrink away from your new habitat.  I once studied a grassland in the north Twin Cities metro and was astounded to find no grassland or shrub-nesting birds.  Chatting with a landowner I asked, do you have cats?  He said, no, but pointed out a barn with eight cats, another with eighteen, and mentioned a neighbor who kept four cats outdoors most of the time. 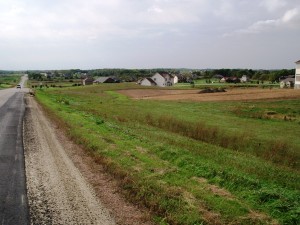 Exurbia marching one 3-acre lot at a time into rural lands of the Twin Cities metro. Photo Kim Chapman

In the southwest metro, where I work, I’ve watched exurban development creep towards us, one big lot at a time, unfurling bluegrass and fescue lawns over vast areas with an army of rider-mowers tending them.  Over that same time I’ve seen more house sparrows.  If you pay attention in movies and radio interviews placed outdoors in cities, you always hear house sparrows cheeping in the background—they’ve been spread around the globe by people.  As their favorite habitat of grass and buildings expands, they make forays into naturally vegetated areas looking for more.  Luckily, the predators at my place are still too much for them and they disappear shortly after arriving.  As development continues, though, the sea of new lawns hereabouts will produce such a bounty of house sparrows, they will overwhelm not just their predators, but other species that use the nooks and crannies of the neighborhood—bluebirds, tree swallows, house wrens and phoebes.  (These species return every year to our property to raise a new generation of themselves, but their days are numbered, I fear.)

So exurban development unleashes a tidal force of human ecological effects, and those of our hangers-on like house cats and house sparrows.  This happens not just on a one-sixth acre lot typical of cities (where I live), but over many acres of land.  Some of these influences, called “edge effects”, penetrate thousands of feet into natural lands, shrinking what’s called the “interior habitat.”  The fragmentation of the planet’s natural fabric is one of the big causes of local extinctions landscape ecologists have studied for some decades now.  Eventually critters that need interior habitat have nowhere to go because everything is edge.  The sixth great mass extinction of species, happening now, is in no small measure due to habitat fragmentation and pervasive edge effects over the entire globe.

We can’t forget to mention the pocketbook issue of whether property taxes from homes on one, five, or ten acre lots pay for all the services that must be provided at a lower density than at city lot densities.  An analogy would be helpful here.  If you built an expressway in the country and made the adjacent farmers pay for it, each would owe nearly a million dollars because four-lane expressways cost around $5 million a mile to build.  Same problem with local services and dispersed homes.  Take a square mile, 640 acres, divide it into ten acre lots with a house on each, and you’ve got 64 families paying for the several miles of roads needed to serve them.  Of course, those families don’t pay full freight because the rest of us chip in, based on the idea we will use those roads, too, when we visit our friends in exurbia.

I don’t know if people who own property where one acre lots are the norm pay more to support the roads than people in more densely settled places, but I suspect they would without the rest of the region’s subsidy.  To keep property taxes down municipalities deliver fewer services.  It’s an interesting catch-22.  Aside from roads, fire, and police, living in exurbia doesn’t buy the services some people like—cultural venues, community events, recreation facilities.  If your life revolves around family, school, and church, and you like organizing your neighbors to do things—that’s just fine.  Communities get out from under some of the economic burden of exurbia by making homeowners install their own septic system and water well, and the power, cable and telephone companies make sure they charge what they must to make operations profitable.

Lastly, there’s the energy and pollution footprint.  Yes, it’s only one house, but if you have somebody mowing a one acre lawn once a week from June through October, there’s a lot of carbon dioxide going up and a lot of noise spreading sideways across the countryside.  There’s also the fertilizer that lawns need two or three times a year, some of which makes its way into the streams and wetlands nearby.

It doesn’t take much thought to see that compact development like the one we proposed serve so many more people at lower cost, with less environmental damage, than houses sprinkled over the countryside.

It makes no sense to preserve rural character this way.  Yet the idea persists because Americans only poorly understand economics and ecology.  The former is about managing our household—keeping a balanced ledger of our society’s workings—and the latter the study of our home—how the blue-green orb that sustains all life actually operates.  Those two realms we understand not well enough, yet they are the essential operating controls for this little bubble we call civilization. – Kim