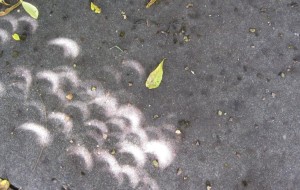 Walnut leaves projecting an image of the great 2017 eclipse–as only walnut leaves can do. Photo by Jim Armstrong

August 25, 2017.  My wife took this picture last Monday in our back yard:  the naturally-occuring “pinhole camera” effect that happens when the partially-eclipsed sun shines through tiny spaces between the leaves.  For a moment, the ground was shining with crescents—a vivid reminder of our companionable star.  I was struck, reading the news of the event, by how many stories reported on the reactions of animals:  kangaroos at the Minnesota Zoo began grazing, as if twilight had begun; birds in the total eclipse zone went quiet; cows lay down in the fields.  And of course human animals stood watching in rapt awe; many of them had driven hundreds of miles to do so.

Which leads me to consider how different an eclipse is on Earth compared to lifeless places.  On the moon an eclipse is simply a passing shadow, knife-edged, and dark within its silent penumbra.  There is no atmosphere to scatter the light, no plants or animals to react to the changes.  The earth, being alive, is ever-reactive, a vast roiling membrane of kinetic impressions.  The spectacle of the shadow of the moon passing across the living face of the earth reveals how thirsty for meaning life can be—how eager it is to translate physics into beauty. – Jim