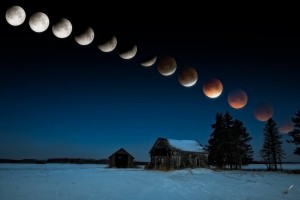 The super, blue, blood moon captured in stills as it arcs across the morning sky in Virginia, Minnesota on 31 January, 2018. Photo Matt Herberg (https://mattherbergphotography.shootproof.com)

February 1, 2018.  I’d been anticipating it for a week, so yesterday I woke up in my usual fog, made coffee and a lunch, forgot to shave, and hustled out the door to -7 F temperatures and a car dusted with snow.  Why the hurry?  Are you kidding me!?  It was the super, blue, blood moon!  The last time it occurred, March 1866, the Civil War had recently ended, merciful Lincoln was dead, a muscular Reconstruction was in full swing, and a resentful South was slouching towards the Klan’s terror and a century of Jim Crow.  That same momentous celestial and natural event of 1866 was taking place today…and I was late to the party.

What the heck is a super, blue, blood moon?  Not “blue-blood” certainly—born to wealth and pedigree.  No, “blue” because it was the second full moon in the month, and “blood” because in the total lunar eclipse the earth would shade the moon from the sun and give the moon a blood-orange cast from the light refracted through the earth’s atmosphere.  It was “super” because it was about as close as it could come to the earth without throwing the whole orbiting operation out of whack.  The moon would appear about 30 percent brighter because it was that much nearer to us.

Such a convergence of individual natural events occurs once in a blue moon—(which isn’t actually that rare, but it’s fun to say)—and never in the last 152 years.  How could one not want to see it?  It would not happen again in your lifetime, or the lifetime of your children or even your grandchildren.  Your great-grandchildren, in their ancient dotage, might get the chance.  Imagine my disappointment when, down by the river with a clear view to the west, I didn’t see a thing.  I’d arrived in time, I thought, but something wasn’t right.  It was a couple minutes past 7 am, and the full phase started at 6:53 am, but nothing was there.  Was it a cloud bank at the horizon, the obscuring haze of the city?  Did it already set?  Whatever the case, I missed it along with most of the rest of the planet’s inhabitants.  So it goes.

The full moon by my favorite oak grove, the morning after the super, blue, blood moon. The rising sun gave the little hill a bit of a blood-orange cast, reminding me of what I missed yesterday. Photo Kim Chapman

What to make of the hullaballoo around a super, blue, blood moon?  Any of the three elements occur fairly regularly, and the combination of two of them can be expected several times in a lifetime.  Stack three lunar oddities, though, and it takes on significance.  There is something of the curiosity-seeker in it, certainly.  The bearded lady of sideshows, a child prodigy churning through Rachmaninoff’s Rhapsody on a Theme of Paganini, New Hampshire’s Old Stone Face etched in a granite cliff—all fascinate because that’s not something you see every day.  Next there’s the timeline—152 years!  We are blessed and special to be given the chance to view something our great-grandparents saw, we think.  There’s a connection back to a world somewhat unlike ours, peopled by individuals who thought a little differently than us, who lived in a divided time perhaps similar to ours but having survived the most momentous period in our country’s history.  There is a pull to that realization.  Lastly, though, is the significance of it all.  When my family hauled itself to Ravenna, Nebraska last August and watched the solar eclipse, I sensed something in the event that felt like significance.  But that feeling came as much from knowing that a shadow 239,000 miles long was tracing a narrow line across a 7,900 mile diameter planet—with me at the shadow’s center—as it did from my emotional reaction to seeing a sunset at midday.  The birds flocking as if to roost for the night, the crickets that took up a frenzied chorus in the dimming light, the oddly-shaped shadows all around—yes, those worked on the senses, adding to a feeling of significance.

In less scientific times, the solar eclipse was feared, and the lunar eclipse wasn’t far behind.  Both indicated dire things a-comin’.  By 1866, the last super, blue, blood moon, perhaps a few said, well, that’s surely a symbol of what just happened—the war.  Today…I doubt none but a handful read God’s wrath or the universe’s displeasure in the coincidence of three regular events.  Its time had simply come.

My master’s degree advisor, Richard Brewer, does not confuse coincidence with significance, unless it conferred luck or fate were cruel.  That view sees coincidence as direct agent, affecting those it acted on, rather than coincidence being a sign from a powerful entity operating behind the scenes.  This is the scientist’s objectivity at work, rather than the medieval peasant’s superstitions that held one in thrall.  I wonder if anybody saw the latter kind of significance yesterday morning.

I have to admit, though, that having done everything right to see it, I was mildly disappointed to have missed it.  It would have given me bragging rights to my grandchildren—“Did you know,” he said with a wheeze, “that I saw a super, blue, blood moon once?  Yep, that’s right.  Saw it with my own two eyes.”  So, because I actually didn’t, I’m now on the hunt for another amazing coincidence that, while not significant, will still make me pause, wonder a bit, and give me something to talk about in old age.  – Kim