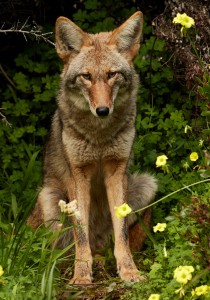 February 18, 2018.  Taking a walk through Graceland Cemetery at Clark and Irving Park in Chicago we watched a coyote watching us.  At a distance of a hundred yards and in poor light, we could only see its outline—in profile like a German shepherd without the rear end slump, maybe a little like a husky in the head.  It looked quite regal and, except for its moving, fit quite nicely among the various cenotaphs and monuments to the dead.

What the heck is a coyote doing in the middle of Chicago, city of big shoulders, hog butcher for the world, 2.7 million human souls swarming, even more cars, trucks and buses, at a cemetery surrounded by three major roads and the screeching El bulging with commuters? 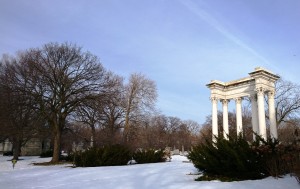 Among the monuments to the dead in Graceland Cemetery, the coyotes run free. Photo Kim Chapman

You hear of urban wildlife—the much-watched red-tailed hawk nesting on a building overlooking New York’s Central Park comes to mind (at least, to my mind).  I myself have seen eagles nesting in people’s backyards along the Mississippi River.  A pileated woodpecker recently caught my attention outside the neighborhood liquor store, and a short while later in my neighbor’s green ash tree.  Then there was that lone (and lonely?) turkey in the back yard last month—standing on the porch staring at our storm door.  I almost let it in the house.  Bears wander periodically through some Minnesota towns, policemen have shot a cougar along the Minnesota River by the airport, frantic deer have smashed through a family’s front picture window in my neighborhood, red-tailed hawks watch the morning commuters from lampposts across the Cities…I could go on.

I guess the basic idea is this…if given half a chance, nature finds a way into the human domain.  Some find that frightening, some merely irritating.  There are a few for whom the idea of nature and people mixing it up feels just plain wrong—undoing our centuries-long American project to bring nature fully to heel.  But I take heart in the evidence that these old ways of thinking are fading.  So many cities and neighborhoods are making wild places ordinary.  So many are assessing their open spaces and realizing that there’s not a lot of it left—and what’s left needs to be protected as the rare natural resource it is.  Park departments, city planning departments, urban redevelopment teams—I have worked with them all and see in many a recognition that frequent and close contact with the natural world completes the human experience.  My own opinion is that so many of our behavioral and social ills found in urban spaces, especially poorer ones, would be helped by more green space.  I encourage you to read Richard Luov’s Last Child in the Woods if you’d like to learn more.

Coyote making tracks and a beeline to its destination. Photo Kim Chapman

Back to the cemetery coyotes…knowing they are there doesn’t faze my daughter and son-in-law, nor me for that matter.  They watch us from a respectful distance—although my daughter told me that on one stroll a coyote seemed to be trailing them.  Coyote attacks on people, mostly children, happen but are several orders of magnitude less likely than getting hit by a vehicle in the Loop.  As with any wild animal, caution is in order.  Still, my heart gave a little leap when I saw that coyote…or see any wild thing out of place in the human world.  That turkey, for instance, roosting in our red pine, or a Swainson’s thrush with its flutelike song that I count on hearing in spring migration—ah, happy am I that the world is full of other life and I am in it! – Kim