Just Talking About…Derechos and Other Inconveniences in Nature

The July 4, 1999, derecho in the Boundary Waters of Minnesota turned a forest into a jumble of pick-up-sticks. Photo Duluth News Tribune.

July 4, 2019.  Twenty years ago to the day as I write this, winds spawned by a fast-moving weather front tore through Minnesota’s Boundary Waters and adjacent Quetico, Canada, at speeds of over 90 mph, snapping the tops off 200-year-old trees and knocking over eighty-foot tall pines like bowling pins.  The cause—a synergistic confluence of weather conditions called a derecho.

Although four people were killed—crushed by falling timber—the damage to the human-built world was miniscule—a few buildings knocked in, some roads blocked for several hours, a couple power lines down—not much happened, really, by human standards.

Twelve years ago in May a 76,000-acre wildfire torched areas of the same forest and then some, with no casualties (except a suicide a year later by the man who inadvertently started the fire)—though 150 buildings went up in smoke.

I just drove through those same forests and can report with absolute certainty that the wind-blasted and burned forests are filled with life and growing vigorously greener and lusher each year.

Meanwhile, consider the human-constructed world.  Years after the Haitian hurricane that so many responded to with often diffuse or misdirected goodwill, so much damage remains unrepaired.  Last year’s firestorm in Paradise—California, that is—left thousands of people without homes, and home-building since has hopelessly lagged behind the urgency of the situation.  In the slow-motion virtual disasters that are Detroit’s East Side and Chicago’s South—a legacy of disinvestment and occasional spasms of fiery violence—signs of society’s inability to heal are everywhere.  Even my little big town, Saint Paul, shows signs of incremental ruin in its potholed, crevassed streets, especially after a particularly hard winter like the last one.

When I worked as a land steward at The Nature Conservancy, as hard as it may have seemed to raise a million dollars from donors to buy land, how much harder it was to raise one-tenth that amount to manage the land once we owned it.  Let’s face it—taking care of things, maintenance—is tedious work, only a fraction as exciting as building something new.  Putting broken things back together likewise tries the patience.  Just think of all that unmended furniture and chipped heirloom dishware piling up in the basement that your children must someday toss, after you are trundled off to the assisted care facility.  Maintenance is always the last thing people want to think about, pay for, or, even worse, actually do.  Fortunately, the Chinese have solved that problem for us by manufacturing at much lower cost all the things Americans used to make—at such a low cost, in fact, that repair shops for most items are few and far between, if they exist at all, and when they do, it’s a warren of broken objects and parts for the items that workers there strive to repair.  From the looks of things, there’s no money in the repair business.  It is cheaper to buy new than repair, it seems, for most things except jet planes, motor vehicles, and homes.

Imagine facing the challenge of Christchurch, New Zealand’s third largest city and the largest on the South Island, in the weeks after a 6.2 earthquake in 2011 broke or rendered unusable most downtown buildings.  The people just walked away from the years of effort and massive expenditures necessary to put it aright again, leaving a strange, modern ghost town for Japanese tourists to snap photos of, as they also do in Detroit’s East Side, by the way. 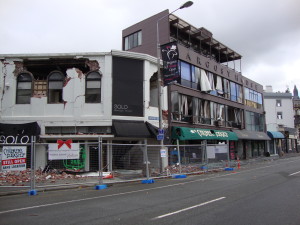 I draw this contrast between the resilience of the natural versus human-built world when beset by disasters—most natural but some of our own making—to make a point, of course.  Nature is self-repairing using only the energy of the sun, while humanity must set aside disaster relief funds in rich countries or rebuild with scavenged tin siding and plastic sheeting in poor ones.  Regardless of the means to be prepared for the worst, it takes time and extra resources to set things right again.  In the 1970s there were still eyeless buildings in London and Berlin from the bombing raids that ended in 1945, despite the billions of dollars in financial aid and investment poured into Europe after that terrible war.

Although some natural ecosystems when damaged don’t return to a semblance of their earlier selves—old growth sequoia and redwood groves after clear-cutting, for instance—they return to a green, vigorously growing state quite soon after a major disturbance.  A year after the Yellowstone fires of 1988 consumed nearly 800,000 acres of lodgepole pine forest and other vegetation, the ground was carpeted in grassy verdure and blooming wildflowers.  The system was not destroyed, only remade.  Did that happen at Christchurch?  Nope—that renewal required that people invest in the restoration of the human-built ecosystem, which stretched the financial means of that country, and so it has been slow to happen.  Speaking hypothetically, if that renewal were powered by the sun, perhaps something would have been done right away. 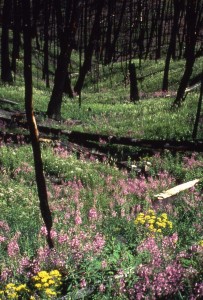 I am in the business of trying to marry the healing power of nature to places where people live and work.  A marriage contract between the natural and human-built world was signed, in a manner of speaking, a few decades ago in the realm of stormwater management—regulating and cleaning the dirty, fast-moving wash from rains coming off roofs and streets.  Imagine civil engineers—meaning they deal with infrastructure, though they are often polite, too—intentionally building a wetland or prairie swale even as they dig trenches for sewer pipes.  This hybrid natural-engineered system to manage the rain and snowmelt coming off the land is called green infrastructure, and it usually costs less to build and maintain than a purely hardscaped system of gutters, drains, and pipes.  Cities have a strong incentive to install green infrastructure—namely, their capital and operating budgets.  To take just one case, Milwaukee did the math and learned that the city could manage stormwater runoff at a lower per gallon cost if it bought the lowlands of the upper Milwaukee River—and prevented them being filled for development—than if it built a Deep Tunnel project to carry runoff from the upper watershed to Lake Michigan.  More consequential for people, Deep Tunnel runoff is shunted largely uncleaned to the big lake.  The natural system, on the other hand, removes much more of those pollutants as runoff passes through.  A better outcome for the price of a cheaper approach.  Still, the hard engineers won out and the Deep Tunnel was built—though Milwaukee’s Greenseams program to buy up flood storage areas also moved ahead.

I am hopeful.  People are thinking about making the places we live, the cropland we plow, the pastures we graze, and all the rest…a little more connected to nature, a little less over-muscled in terms of human engineering, and a little more resilient in the face of what will certainly be a more disordered climate by 2050.  – Kim