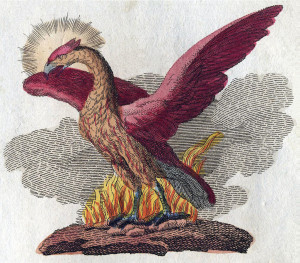 The most famous dreamed bird, a phoenix, imagined by F J Bertuch in 1806, as the documentation of real birds was well underway.

May 24, 2020.  There are many birders, but fewer life-listers.  The former are serious enough bird watchers to stop dead in their tracks and look up when they hear the call of an uncommon bird passing overhead.  I’ve done that hundreds of times—just yesterday, in fact, while on a bike ride, and heard the call of a nighthawk.  I braked hard, looked up and scanned the sky—there it was, a small, undulating dot, giving off its buzzy “BEER” call after every upward slide of its roller-coaster flight path.  Second one I’d seen this year, and with its population dropping a couple percentage points each year, a member of that tribe was worth pausing for, just to appreciate its existence.

Then there are the life-listers.  The name says it all—life, list.  They have a written record of every different species of bird they’ve seen:  what, where, when, how, with whom—but not why.  The why is understood.  The thrill of the chase, the satisfaction of achievement, and, naturally—as is natural for our species and all others—to be better than the rest.  It is a competitive sport, this life-listing, as much as ping-pong, singles tennis, golf, and any individual contest against another.  I’m sure there are team life-listers that vie with rival teams, but the archetypal life-lister is a solitary act, planning the next weekend jaunt to the yet-unvisited state park or more arduous expedition to the Galapagos Islands.  Since there are some ten thousand species of birds on the planet, it would certainly take a lifetime to see them all—if you had time and money enough, and could track them all down, given the rarity of so many.  The world’s top life-lister is Claes-Göran Cederlund, a Swedish physician, who’s seen 9,675 of the world’s birds.  He is 72 years old.

Now there is another type of life-lister I just learned about.  At a socially-distanced dinner outdoors with friends on a chilly night in early May, one of them told us about a friend who is a dream-lister.  “What is that?” we asked.  Our friend explained.  While you are asleep, if you encounter a bird in a dream that is unlike any you’ve ever seen—a phantasmagorical creature, a chimera, something put together from parts of other birds you know but never before imagined until you, yourself, dreamed it—you must, upon waking, write down a description of the dreamed species and record its name, both common and scientific.  It is as if you were Alexander Wilson—a less-famous 19th century ornithologist than J.J. Audubon, but more scientifically-accomplished—and had shot a Tennessee warbler around Nashville in order to name it, describe it, and bring it to the attention of the scientific world in a publication that all could read.  (Wilson did, in fact, publish the first scientific description of the Tennessee warbler in 1811.)  So, just like Wilson and the welter of taxonomically-driven naturalists from Linnaeus to the present, the dream-lister documents and reports the new species of bird encountered in the dream, as if coming upon the pass in Darien, Panama, from which Balboa saw the Pacific Ocean, the first European to do so from its eastern rim.  (It was not Cortez, as Keats wrongly stated in his famous sonnet about the power of art:  Upon First Looking Into Chapman’s Homer.)

More questions from our dinner party….  How many birds has he dreamed?  Over three hundred.  But there’s another dream-lister we heard of who’s up to five hundred imagined birds.  (Raised eyebrows all around.)  Are there any rules?  Yes, you must name the bird while dreaming, or it doesn’t count.  (Protests all around—you’d have to be a lucid dreamer, one of us complained, to pull that off.  I can’t even remember my dreams, let alone remember the name I gave an imaginary bird.)

You could say that the dream-lister is just a life-lister gone too far.  You could say that he or she has an extraordinarily competitive urge.  Neither is a charitable nor deep interpretation of what is going on.  Not having talked to a dream-lister, I don’t know the real reason, but I can, I think, relate to the impulse.

I remember one morning in graduate school waking to my wife laughing.  “What’s so funny?” I asked.  She told me that she and I had had a conversation that night, while I was asleep.  I’d been learning the names of insect families for an exam in entomology—repeating them in my mind while conjuring an image of a typical member of the family so that, when I saw the specimen in the lab, I’d know which family it belonged to.  Tenebrionidae, the darkling beetles, Corixidae, the water boatmen, Muscidae, the flies, and so on.  I can still remember them.  So immersed was I in that world of naming the world that it became as commonplace to me as the names of my schoolmates from grade school through college.  So that night, according to my wife, I sat up in bed and stared out into the darkness.  That woke her up and she sat up, too, then looked at me.  I asked her, “What family are you in?”  She knew I was studying insects and to humor me replied, “Diptera,” the flies.  I corrected her, “That’s not a family, that’s an order.”  “What family are you in?” she countered.  As she tells it, I paused and said firmly, “The Chapman family.”

I tell this story because it is funny, but also indicative of how deeply engrained the natural world can be in people like dream-listers, or frankly anyone who, day in and day out, focuses on one thing.  The author of a novel, a young car mechanic learning the trade, a farmer at planting or harvest time, the student of entomology learning families.  The subject matter just bubbles up from the unconscious, where it is simmering, fed by the fuel of daily exposure to the subject.  And the dream-listers?  Well, they just go with it.  If a never-before-described bird shows up in a dream, then, in the long tradition of taxonomists everywhere, you had better describe and name it.  The strange thing is, nobody will ever see the bird, and very likely neither will you again.  I would add that to the list of reasons—it is ephemerata of the most ephemeral kind—something dreamed that doesn’t exist, and, after falling back into the world, the dreamer must accept it for what it is—only a memory that will fade.  So naturally, you must write it down. – Kim