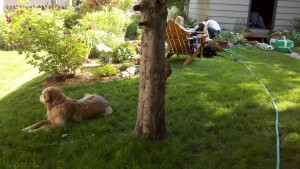 A lovely summer day in the Temperate Zone. Working and being outdoors is not a problem.

March 21, 2021.  You know how, sometime in late spring or maybe early summer, you step outside without a coat on, feel a certain gentleness in the slight wind brushing your face, see the optimistic sunlight slanting through fresh green leaves on trees overhead…and suddenly washing over you is a sense that all is right with the world?  Well…chalk that up to your evolutionarily-inherited climate preferences.  You can thank the weatherman for his forecast, but you can thank our ancestors’ physiologies and choice of where to live for your contentment standing outside at 72° Fahrenheit.

Turns out that, for 6,000 years, the webs of travel and communication networks among our dense settlements—call the whole thing “civilization” if you want—emerged and has existed where the mean annual temperatures have been 52-59° F (11-15° C).  Yes, it might snow in winter and a day in mid-summer might make you sweat, but the average conditions over a year are “temperate”—as in the “Temperate Zones” at mid-latitudes in the north and south hemispheres of the planet.

Temperate is such a flexible word.  A person’s temperament can be temperate, you can hold your temper and temperately argue with a fierce opponent who, by comparison, comes off as a hothead.  The Temperance Movement was organized by women in the late 1800s to cut off the supply of demon rum to hard-drinking, wife-beating husbands.  The word “temperature” has the same Latin root—temperare, meaning “restraint.”  Temperature is a restraining force in the world—a limit above or below which we can live only if we prepare ourselves.

But on that lovely late spring day, we are content, for we need not prepare.  Just walk outdoors and there you are—comfortable, calm, and looking forward to the day.

In 2020, just 20 million human beings—in a world population of 7.6 billion—lived outside that 52-59° F annual range.  That is a human’s ideal temperature for existence, our temperature sweet spot.  Fifty years hence, if settlement patterns and densities stay the same, 1 billion humans will live outside the temperature sweet spot—not because they moved to less comfortable climes, but rather because the comfortable climes will have moved away from them.  The heat of the tropics will have migrated northward and southward towards the planet’s poles, engulfing portions of the Temperate Zones and driving people to the air-conditioned indoors.  For all the details, read the article published here:  https://www.pnas.org/content/117/21/11350.

Dr. Xu and his colleagues predict a global shift in temperature zones to the north and south. Green areas will become more comfortable for people to spend time outside year-round, and red areas less comfortable. Source: Xu et al. 2020 Proceedings of the National Academy of Sciences.

Of course, people won’t just tolerate their new climate.  They’ll move to where things are like they used to be, following the temperature sweet spot northward and southward.  The green areas on the map here show where mean annual temperature will improve, red and orange zones where it will shift beyond the sweet spot, and yellow where things will stay as they have for millennia.  That migration has begun—for example, farmers from Central America arriving at the USA’s southern border are escaping not just violence but also crop failure due to changing weather patterns.

Where people want to stay put, air-conditioned indoor spaces will make it possible.  With its oil wealth, Saudia Arabia and the nations bordering the Persian Gulf will be able to cope, though at great expense.  Here in Minnesota, winters will become milder—though hated ice storms more frequent—and snow and lake ice less reliable.  That beautiful late spring day when I step outside and feel completely alive and content—that, too, will change.  It will come earlier as the Temperate Zone inches northward toward the Pole. – Kim