July 9, 2015.  Staying on the seventh floor of Chicago’s Water Tower Place Hilton, I found a printed note on the desk: 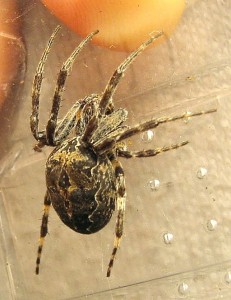 Bridge spider, an orb-weaving high-flyer, on a bridge in Germany (Photo Sarefo)

…Lake shore high rises, Willis Tower and John Hancock are noticing the annual influx of flying spiders spinning mini-masterpieces as high as 95 stories.  Baby spiders release silk from their spinnerets to create a balloon-like contraption.  The spiders then use the balloon to hitch rides on uplifting air currents from the lake.  The spider is Larinioides sclopetarius, an orb-weaving spider found throughout the Northern Hemisphere.  In natural environments, these spiders live on rocks overhanging water.  In the city they have found the next best thing:  tall building and high-rises.  What makes high-rises so appealing, perhaps, is the light shining on windows. 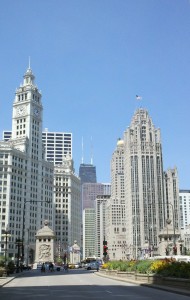 Even now, bridge spiders are flying around the Wrigley and Tribune towers in the heart of Chicago, at Wacker Drive and Michigan. (Photo Kim Chapman)

Two things are remarkable here:  first, that a spider has been so adaptable, and second that the Hilton has chosen to inform its patrons so thoroughly and so eloquently.  The note seems to elicit admiration for the spider’s abilities—one way to calm people down who are frightened by nature’s eruption into their world.  Arachnophobia is the number one phobia in America, so it is likely that patrons of the hotel have been freaked out to see spiders the size of fifty-cent pieces crawling about in their rooms, or even just dangling from webs out their windows.  But rather than sweeping the problem under the rug, or declaring war on the spiders, the hotel has chosen to live with the spiders and work around their habits by educating hotel guests.  No doubt the arachnophobes shut their windows and shudder, but I wanted to see one (I found a picture on the web, here.)

Larinoides sclopterius is more commonly called a “bridge spider,” for obvious reasons.  Its parachuting talents have spread it across the globe.   In a nonhuman world, it would spin its webs on cliff faces, but it is perfectly happy to use our urban structures—it doesn’t see a difference between nature and culture.  And a good thing too, since cities are full of bugs that need to be eaten by somebody.  Architects and engineers think of the physics of a building, but of course there is also always going to be the biology of a building; animals will be our neighbors whether we like it or not.  (A simple solution here, by the way, would be to put screens on the windows.)

I could envision an annual flying spider festival on the lakeshore:  kids dressed up as spiders, free parachute rides, etc.  There is a marketing opportunity here. – Jim