Despite my distrust of the Catholic Church hierarchy (raised Lutheran, you know), I was really looking forward to Pope Francis’ Encyclical Letter laying out his thoughts on the right relation between people and nature.  At over 40,000 words, laid out in short paragraphic arguments, it is a good read for summer vacation—well…at least a more world-relevant read than the latest Danielle Steele novel. 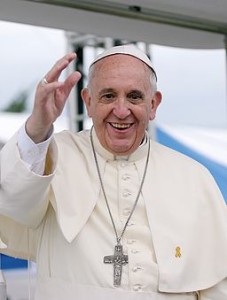 Pope Francis greeting his flock in Korea in 2014

What Francis has done in this “dialogue with all people about our common home,” is to lay out the case for two big ideas.  First, that we are embedded in and arise out of nature, which is a divine creation.  Therefore we have an obligation to treat it with tenderness and love.  Second, that the last two hundred years of technological and economic progress have severely damaged the earth and harmed large groups of people.  To secure the future well-being of the planet and humanity, Pope Francis calls for an “integral ecology.”  He models this kind of ecology after the integrative science of ecology, and extends it to our cultural, economic and technological systems.  I’ll talk about the first big idea, and next time, about the second.

Francis says a few things about people’s proper relation to nature that took me by surprise, but which he maintains are neither unusual nor new statements by the Catholic Church.  In fact, he argues that the way the Biblical directive to subjugate and have dominion over the earth has played out in the minds of believers is a misreading of the intent of those passages.  We have no absolute right to land ownership, Francis says, but simply mortgage it while we’re alive, then pass it down to those who have just as much right to receive it in equally good condition as we had received it from those who went before.

You can see this idea at work in property taxes—we pay property taxes not just to maintain roads and schools, but as a sign that we do not own the land forever and must share its benefits with subsequent generations.  Zoning ordinances limit what we can do with land and water that we temporarily own so as to preserve the rights of others to a safe and beautiful environment.  Timothy Beatley, in his book Ethical Land Use, points out that the US Supreme Court has upheld the right of society to guard the common good—that is, the land’s potential to be productive and beautiful for others, including those coming after us—by enacting good land use rules voted on and approved by the community.  So according to traditions and practices of western society, the individual does not have an absolute right to do whatever he or she wishes to do with the land, regardless of what libertarian-minded people think.

Overall the Pope’s Encyclical is a beautiful and sensible expression of the impulse to care for nature that many of us have felt, and which echoes ideas in American Indian philosophy about animals being our brothers and sisters, or Hindu ideas of intergenerational and interspecies connectedness through reincarnation, or the Buddha’s compassion and reverence for all life.

But what is most delightful about Pope Francis’ letter is his quiet certainty about a fundamental truth—every species on the planet, including us, is part of a woven living fabric across time, and what people do to each other and other species reflects their small daily acts of kindness and love, or contrarily, acts of cruelty, anger, and hatred.  In other words, says the pope, the earth and society are as we behave, and what we see represents how much goodness or evil we bestow upon nature and culture.  I think he is rocking some boats with this kind of ecological talk:

If we approach nature without this openness to awe and wonder, if we no longer speak the language of fraternity and beauty in our relationship with the world, our attitude will be that of masters, consumers, ruthless exploiters, unable to set limits on their immediate needs.  By contrast, if we feel intimately united with all that exists, then sobriety and care will well up spontaneously.

Up next…what does Francis think we ought to do to make things better?  — Kim