Everybody loves Pope Francis it seems.  His defense of the least defended of humanity’s billions, his scolding of those who pursue wealth and power for its own sake, his surprising tolerance of the human condition despite his own Church’s tradition of bigotry, with a little house-cleaning thrown in—all of these things make him one of us, one of the “little guys” trying to get a fair shake in an economic and cultural realm not of our making.  To have such a powerful person in our corner at last is a breath of fresh air.

His Encyclical on “Care for our Common Home” is no different.  As I said last time, he is calling for a new form of ecology, one that embraces all human existence and seeks to help us see that everything is connected to everything else.  Embracing this type of ecology would put leaders and those with power and influence in an unfamiliar position:  stewards and caretakers, rather than defenders of ideology and economic interests.

In this little offering, I’ll paint a picture of what Francis thinks is the solution to a 200-year old crisis in the making, as he considers it.  He admits himself that the Encyclical offers no detailed solutions, no framework of strategies.  Rather, in broad strokes he suggests that leaders of the planet must, in a holistic way, pay attention to food and energy production and use, transportation and urban planning, forests and the life in the seas…even to “biodiversity”, the total store of species, ecosystems, and genetic variety on Earth.

He cites political corruption—personal economic interests that enslave officials—as an opposing force, and he asks that the full costs of a development project, including harms to local people and nature, be integrated into project planning from the beginning.  More pointedly, he asks that the burden of proof for showing that no harm will come from a project be shifted to the project’s developers and off the backs of locals and conservation-minded people who must prove a project’s harms.

It is clear, though, Francis believes that a response to the ecological crisis begins with how we think and feel:  “…our indifference or cruelty towards fellow creatures of this world sooner or later affects the treatment we mete out to other human beings.  We have only one heart…”  Reading this passage, I was reminded of Edward Hicks’ famous series of paintings, “The Peaceable Kingdom,” depicting harmony among people, between other species, and between them and us.  I like this particular one quite a bit—the little girl in her Sunday best with the disheveled boy riding the back of a lion—quite a contrast. 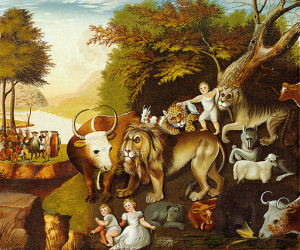 The Peaceable Kingdom, one of at least 62 renditions by Edward Hicks, circa 1820.

The Pope identifies the source of not only worldwide damage to nature, but also to the Earth’s people, as a limitless but hurried and unrealistic vision of the future created in part by “economists, financiers, and experts in technology” in partnership with politicians who make the laws and decide how to spend public money.  Lacking a mindset of “patience, self-discipline and generosity,” society’s leaders fail to take actions and spend money in ways that enlarge the public good.  In the spirit of integral ecology, this would mean taking an ecological approach with a social agenda—“combating poverty, restoring dignity to the excluded, and at the same time protecting nature.”  In the Pope’s words…

We have to accept that technological prod­ucts are not neutral, for they create a framework which ends up conditioning lifestyles and shap­ing social possibilities along the lines dictated by the interests of certain powerful groups.  Deci­sions which may seem purely instrumental are in reality decisions about the kind of society we want to build.

I don’t believe Francis is guilty of Luddite thinking—the idea that technological change must be resisted.  Rather, he is saying that technology and the money that creates and spreads it should not define humanity.  Just as some economists have broken with their discipline’s ideology that people’s choices about what serves them best are always rational (and winning Nobel prizes for it), so too should we stop thinking that any technological breakthrough is always a good thing.  Being able to choose among forty brands of toothpaste or two hundred brands of car does not make you free, says Francis.  Instead, he insists that humanity’s destiny should be tied to “authentic freedom” and a new definition of prosperity—which is really a very old definition.  Libertarians and the Pope agree on this point—we can’t get there with laws and regulations—they are just temporary stop-gaps.  – Kim