Just Talking About…Eagles–Back and Ready for Another Year

This bald eagle has something in mind–fly, chase, threaten? Whatever it is, he’s ready! Photo USFWS Mountain-Prairie

January 29, 2017.  No matter whom you voted for in the recent election, or whether you are joyous or terrorized by our President’s first week in office, one thing remains constant–an eagle’s urge to bring the next generation into the world.  We’ve had a pair nesting down by the river for some years now–they used to live in the park at Hidden Falls, on the Mississippi River, but after the power company cleared around their high-tension wires, the eagles moved on.  They set up housekeeping on top of the bluffs, in the tony neighborhood facing the setting sun and overlooking the big river.  That sufficed for a couple of years, but something about the place didn’t suit them, and they hiked on downriver a half mile or so to a street off the main drag on the bluffline–where the houses are a little smaller but people are, presumably, a little happier because they don’t have to keep up with the Joneses so much. 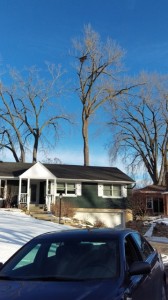 This eagle pair is what wildlife biologists call “habituated.”  That means they can stand having us nearby.  A lot of other animals have learned over the years that, as long as they keep their heads down, we’ll let them live among us.  So cockroaches by the billions are largely unseen unless you step on one on your way to the bathroom late at night.  Raccoons and rats hide out in storm sewers until after dark.  We like it when the monarchs drift through on their southward flight in August.  Crows, starlings, geese, rock doves (the new name for pigeons) and the millions of other habituated birds can always fly down the block when we start to harass them for their messy ways.  And now eagles are habituated. 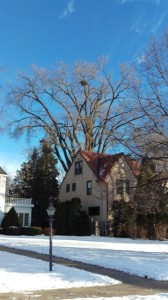 Former residence of the eagle pair–slightly upscale from where they live now, but still behind somebody’s house. Photo K. Chapman

Not all of them.  You can still spook a pair off its nest, never to return, if you cut trees or build things within several hundred feet of it.  That’s why there is still a law to protect eagles, now that they’re off the endangered species list yet still our nation’s animal totem.  On the other hand, the eagle population in the Midwest gets bigger every years, a trend that began when DDT was banned around 1972, thanks to the work of the infant Environmental Protection Agency (formed in 1970) which argued persuasively that not only were eagles losing the race to stay relevant, hundreds of bird species around the world were taking it on the chin, too.  DDT, a potent insecticide, was getting into the bodies of eagles and other birds that ate animals–fish, in the case of bald eagles–and causing egg shells to be too thin to stand the weight of the mother trying to keep it warm.  Crack.  So this is a good thing, the growing eagle population, but now there is a balancing act between allowing some eagles to be killed accidentally during otherwise lawful activities, like energy production, and knowing that an eagle that is killed will quickly be replaced by one of the burgeoning population.

Our eagles, whom I can see any time I want, are clearly unfazed by elections, revocation of past executive orders, dissolution of agency mission statements, and the general turmoil in our political landscape.  Next time I feel a little unhinged by it all, I’ll take a stroll down the river bluff road and consider the eagles–who neither reap nor sow, yet in their quiet deliberation manage to replenish the earth with their kind every single year.  — Kim