Just Talking About…The Climate That Was 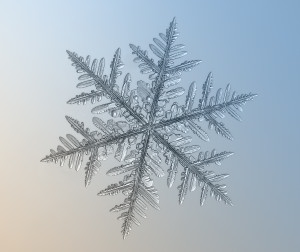 Snowflake demonstrating that no two are the same, in Moscow, January 2013. Photo Alexey Kljatov

February 25, 2017.  The morning sun after a snowstorm, an iconic Minnesota sight.  The crisp air and glittering festoons of snow on every horizontal surface bring back my first memories of the state, which I saw when my family traveled from Indiana to Northfield one January in 1968.   I had never seen real winter, crystalline and vast; Southern Indiana winters are more like brief interludes, where the moist snow resembles shaved ice at carnivals and lasts a day or two, sitting heavily on the bushes and wet in the roads.  I remember, during that sojourn in the north, sleeping on a floor in a guest room under a down sleeping bag left over from our host’s army days and feeling the morning chill in the room like a palpable presence.  I remember the windows etched with frost and the impossible brilliance of sunrise (the Indiana winters were swathed in woolly clouds and plunged in monochrome). 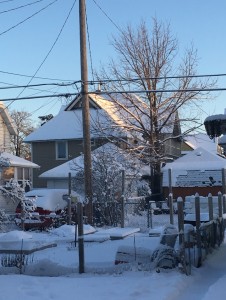 View out my backyard this morning—snow on the garden and my neighbor’s roof catching the first light of day. J. Armstrong

Years later we moved to Winona where I took a job at the university; we couldn’t have been happier.  When I went on the professorial market, my wife and I drew a line across the United States that we called the “snow line”—below which we would not go.  Winter without snow did not seem worth our trouble.  We arrived in Minnesota in 1999 in the midst of a heat wave—it was 105 degrees the day we moved in.  But my first purchase, once the boxes were all opened and decanted and the furniture put in place, was a brace of snow shovels—sturdy steel implements painted caution yellow.  I couldn’t wait for the plunge into the deep freeze.

How much climate defines us.  The outer surface of things becomes the language of our inner emotions–sunrise and sunset, the moaning of a blizzard in the house eaves, the call of a crow in the snowy top of a hackberry tree–all are embedded in our psychic and emotional life and populate our dreams.  To a great extent we become products of local weather, if we are at all alive to our senses.  Last week the temperatures rose into the 60s here; I heard robins singing their spring song and I saw open water on the lake.  To see the sights and sounds of early April in mid-February seemed sickening.  The south, which I had gladly fled, was invading the north.  And I knew why.  I knew that our profligate burning of fossil fuels was turning the climate into a chaotic pressure-cooker; I knew that even conservative predictions were saying Minnesota would fairly soon have the climate of Arkansas; that the winter I have come to love would become shorter and rarer.  I knew that the current administration in Washington was busy hastening that hellish crock-potting of the American climate.

All the more reason to rejoice in this reprieve—to revel in the glitter of the morning.  For a moment we have the Minnesota climate we fell in love with.  — Jim