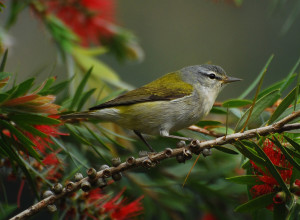 A male Tennessee warbler in his winter haunts–Costa Rica!–waiting for the signal to head north. (The signal is sex, by the way.) Photo Jerry Oldenettel.

May 7, 2017.  In a couple of days the first big warbler wave will arrive at the 45th parallel–halfway between the equator and north pole, and the place where I live.  I’ve been watching this event for over 30 years.  In the fall it seems years away.  In winter it seems impossible that such a thing could exist.  And then suddenly, here it is.  Treetops full of tiny, flitting forms, edging out to branch tips, darting forward to nab an insect, dropping to a lower limb, then dashing to another tree.  They sing as they eat–every species, its own song.  The song I gauge the whole phenomenon by is the ticka-ticka-ticka, swit-swit-swit, chew-chew-chew-chew of the Tennessee warbler.  It’s not from Tennessee–it was just first shot and described by a naturalist there–and it doesn’t sport the usual flashy colors of most warblers of the Americas, but it is certainly among the loudest.  You can’t miss it.  I hear them shouting from nearly a block away and, for that reason, use them as the bellwether of the first warbler wave’s arrival.

These birds are landing here after several weeks of journeying from South and Central America.  Imagine–less than an ounce of hollow bone, flesh and feathers, coming so far, hundreds of miles, to set up housekeeping in the temperate and boreal forests of North America.  Now that is some feat.  I assume they’ve been doing it every year, faithfully, full of faith that what they need will be here, since at least 11,000 B.C. when the glaciers began retreating north from the Upper Midwest. 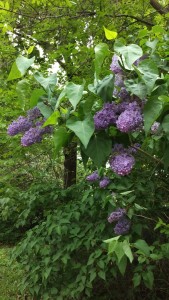 Lilacs in full bloom in St. Paul, May 15, some days after the first warbler wave in 2015. Photo K. Chapman

You can tell they are almost here when oak leaves–one of their favorite trees for the moth larvae and insects they harbor–are 1-2 inches long, and when lilacs are in bud or just beginning to bloom in my neighborhood.  Which is now.  They usually come when they can hitch a ride on a tailwind with a southerly component–which is usually an approaching low pressure system that generates southeast winds for a couple days.  We have southeast winds, we have oaks and lilacs at the right stage, and I am sticking my neck out to say that I will wake up Tuesday morning and hear them yelling from the treetops around my house.  I’m going to leave my windows open Monday night, even though rain is predicted. – Kim